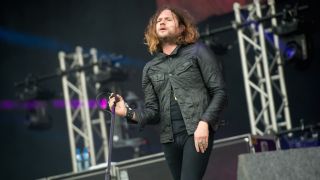 This article first appeared in The Blues #4, November 2012.

Capturing that moment in the late 60s when British blues exploded into hard rock without sounding like some throwback is a tough old trick to pull off. With third album, Head Down, LA band Rival Sons have done just that; and while they wear their Cream, Led Zep and Free influences on their sleeve with pride, it’s their delivery and quality songwriting that sets them apart from the rest of the retro-rock pack. The Blues caught up with frontman Jay Buchanan about his obsession with legends like Blind Willie Johnson and how his discovery of blues music came like a religious revelation.

When did you first get into the blues?

I was raised a Pentecostal Christian, going to these very spirited churches. My mother sang in the choir and there were always spiritual hymns and songs being played. That’s blues. And my grandmother would sing gospel to me when I was really young, and that’s blues as well. Blues is country music. Past that, I was probably nine or so when my father had tapes of the complete Robert Johnson. When I first heard him sing, right away I could hear God in the man’s voice. Not that he was a religious figure or a mystical power, but it just sounded like someone channelling the truth. It’s almost like listening to a ghost, it sounded so spiritual, it got me right away. From there, I moved on to John Lee Hooker and Blind Willie Johnson. It was the honesty that was evident from heart to throat.

What was the first blues record you bought?

What was the first blues song you learned to play?

Probably See See Rider. When you first try to learn these songs, you learn them on a very surface level but, to really get to the intricacies, boy, it takes a long time! Blues guitar is one thing, but the sentiment of the blues is that it’s honest heartache. The voice can’t lie. When I listened to Blind Lemon Jefferson with his diction and delivery, I just thought wow!

Did you see many blues gigs where you grew up?

No. None of my friends listened to any of this stuff. The blues was always the stuff that I listened to alone. I’d have it on my headphones listening to Howlin’ Wolf and those guys. When all my friends would get together and we’d be building half pipes and skating, they just wanted to listen to Metallica and hardcore music. I’d say ‘hey man, can I put on a tape?’. I’d put on some Howlin’ Wolf or something and they’d be like, ‘What the fuck is this? You can’t skate to this!’ Then they’d all start making fun of me [sings] ‘wooaaah, I got the blues’.

Was the British 60s blues boom important to developing your sound?

Absolutely. My sound as a vocalist, definitely. And if you talk to the band, Mike [Miley, drums] loves The Who and John Bonham, Robin [Everhart, bass] tends to be more of a jazz guy, Scott [Holiday, guitar] loves Jeff Beck. I bought an Animals compilation when I was 14 or 15 and I just loved the command that Burdon had in his voice. After that, Led Zeppelin; the way Robert Plant cuts loose on those first two records. I didn’t realise at that point that he was copping Steve Marriott really hard on some of that stuff. I didn’t come across The Small Faces until about two years ago. I had no idea who Steve Marriott was and I thought ‘holy shit!’.

Your album Head Down was written and recorded very quickly – was this informed by musicians of an older generation that didn’t rely on multiple takes?

It wasn’t a conscious thing in terms of the way that it had been done generations ago. From an ability standpoint, this is a strong band. So when we were recording, we just wanted to capture fire. I’m a compulsive songwriter, and I knew that Scott could write the riffs. We wanted to catch ourselves in the studio in a similar way to leaning back in a chair, where you could fall back, where it could come off the rails at any point. Our producer David Cobb understood that and didn’t give us the option of relaxing. We’re very fortunate to have a producer that gets our sound and identity.

Who is your all-time favourite blues musician?

It’s gonna change all the time, it always does, but most recently it would Blind Willie Johnson. I’ve really gotten attached to him because of the desperation in his voice - it just sounds really scary!