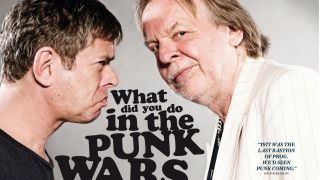 "Let me ask you a question. What’s all this about?”. Stranglers bassist Jean-Jacques Burnel, looking about as fit and healthy as a 60-year-old can, is leaning forward in his chair and enquiring with some intent as to why he’s sitting next to the rather less buff, 63-year-old former Yes keyboard player and all-round prog overlord Rick Wakeman.

Allow us to explain. As part of Classic Rock’s celebration of all things 1977, we decided to bring together two men from opposite ends of the musical spectrum to find out what things were really like on the front line all those years ago. In 1977 Wakeman had spent six months in Queen’s Mountain Studios in Montreux working on Yes’s Going For The One album. In stark contrast, The Stranglers were preparing to release not one but two albums, six months apart: Rattus Norvegicus and No More Heroes. For Yes it marked the end of their imperial phase. For The Stranglers it was the beginning of theirs. Surprisingly, given the fences that divided them back then, when the two men meet they greet each like old friends. It turns out that this is because they are old friends, their paths having crossed several times over the years.

“1977, then,” booms Wakeman, settling back into his chair. “I’m not certain either of us will remember that far back…”

JJ: Well, for me it was the start. It was the first time we’d released an album. We felt something was going on. A bit of a revolution. And with every revolution you chuck the baby out with the bath water. It was a Year Zero for many people, so anything that had gone before was automatically excluded. It was only years later that people actually started admitting to having liked anything before Year Zero.

How long did that take?

JJ: A long time. I do remember [The Damned’s] Captain Sensible at the time, without any irony, admitting he liked Abba; and when I saw the Sex Pistols they were playing old Monkees covers. There was a dichotomy between what people were doing and what they were claiming in the press. A lot of the bands claimed punk had nothing to do with drugs. I was like, “What?”. We used to get so-called hippies because we smoked dope. Because everyone was broke and tight, speed was the drug of choice because it was cheap.

RW: In 1977 I’d just rejoined Yes and we were recording Going For The One in Switzerland, which took took six months…

RW: A lot of that time was spent with Alan [White, drummer] going skiing, Steve [Howe, guitarist] tuning his guitars, and trying to wake Chris [Squire, bassist] up! But [label boss] Ahmet Ertegun came to us and said: “I don’t know how much longer I can keep funding records like this”.

We realised that this was the last bastion of prog rock as we knew it. We were aware of punk. I’d seen it coming a few years earlier when I saw The Tubes and took them to A&M, who signed them.

JJ: Oh, really? We used to love The Tubes. RW: We were aware that something was going on. And what happens when something new comes along is that it kills off what went before it, at least for a bit. When prog came along, it did away with the old beat and psychedelic groups, the way the beat groups had done away with the crooners before them.

When something new comes along, everyone wants to be a part of that peer group, to the extent that they’ll deny their history. It’s only when they’ve gained some confidence that they can start to admit where that history actually came from. Up until that point it’s almost politically incorrect to admit your influences. But you can tell by just listening to the music. On our first album, the nearest thing we had to a prog rock song was this four-part piece called Down In The Sewer. That was about 11 minutes long and it was a suite. Prog rock, essentially, even if it was prog à la Beefheart and The Doors.

How did get you away with that?

JJ: A few people accused us of being hippies. But there was a lot of hypocrisy involved at the time. Like people claiming to be working class when they weren’t. I remember Joe Strummer crying on my shoulder when we were the first band to support Patti Smith and the Ramones. He was in a rhythm and blues band called The 101’ers, and was going: “Oh I wish I had a band like yours”. He used to live in the Notting Hill squats at the time. No one knew his dad was a diplomat.

Was there a rivalry between the punk bands at the time?

JJ: Not at first. Not until success kicked in. I remember meeting Steve Jones and Paul Cook from the Sex Pistols when we supported Patti Smith in 1976, and all Steve said to me was: “We’re going to be famous in six months’ time. I like your haircut!”. Then a year later I remember having a punch-up with Steve and Paul, and Paul Simonon from the Clash at the old Dingwall’s [a venue in London’s Camden Town] That’s when the rivalry seemed to start – when we started outselling everyone.

Did that kind of rivalry exist in prog, Rick? Did you have any dust-ups with ELP or Genesis?

RW: No. The press tried to stir things up, between myself and Keith Emerson especially. But we were great friends and we used to laugh about it all. We let it go on because it fuelled press. But that rivalry did exist between punk bands and prog bands?

JJ: We used to laugh at things like Pink Floyd taking years to make an album. But we’ve just taken two years to make our latest album [Giants, 2012]. The creative process can take time, because you’re not on an assembly line. And you have a life outside of the band as well.

The two worlds did occasionally meet: Freddie Mercury bumping into Sid Vicious in the studio, members of Led Zeppelin turning up to punk gigs…

JJ: I don’t really recall fraternising with any bands from the previous generation apart from Dr. Feelgood. When I was a kid I’d go and see bands like Peter Green’s Fleetwood Mac and Black Cat Bones, who became Free, and I felt that kind of vibe in Dr. Feelgood. Our keyboard player, Dave Greenfield, was a prog rocker, though. When I first met him he had platform boots on, his jacket had frills, and he had long hair and what we called a semi-pro moustache. He introduced me to In The Land Of Grey And Pink by Caravan. I did like that. I do remember the Yes singer [Jon Anderson] though. Is he still into elves?

RW: Jon has his own little world. When he doesn’t like what’s happening in the real one he retreats into his own one. He’s a big fan of yours, though, We were touring together last year, driving around in the same car, listening to all sorts of music. We played some Stranglers, and he said to me: “You know, there’s a few of their songs that Yes could have done”. He was right. Certainly something like Golden Brown.

JJ: I’ll tell you something about Golden Brown that I’ve never told anyone before. It actually developed out of a prog rock suite. We were recording the La Folie album, and Hugh [Cornwell] and I were pissed off because we seemed to be writing all the songs. So we said to Jet [Black, drummer] and Dave: “Right, you two are going to write a song. We’re off to the pub. Have it written when we get back”. We fucked off to the pub all afternoon. Now, with Dave being a prog rocker and Jet being a jazzer, when we got back they presented us with this six-part piece of music. And we were like: “Fucking hell, we can’t record this”. We went: “Don’t like that bit… don’t like that… oh, wait a minute, we could something with that”. And the part we did like formed the basis for Golden Brown.

1977 has retrospectively been cast as The Year Of Punk, but the biggest- selling albums of the year were Bat Out Of Hell and Rumours. Has there been a bit of rewriting of history?

RW: Well, up until 1942 the Germans were winning the second World War!

JJ: Have you seen these re-runs of Top Of The Pops from 1977 on telly lately? What a load of shite! It’s like karaoke central.

JJ: It certainly was. I knew a year later that things were changing, though. I had a bank account, and I went in and the teller was a young girl with streaks of green in her hair. The great British assimilation had begun.

JJ: Yes. It had become the norm. And nobody turns a blind eye.

The Stranglers released their debut album, Rattus Norvegicus, on April 15 1977. Rick Wakeman begins his Journey To The Centre Of The Earth tour in April 24.

Going For The One - Yes