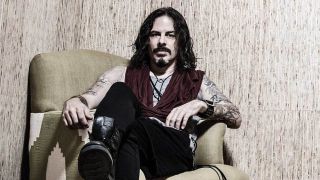 Richie Kotzen’s mind moves as fast as his fingers. It’s a bit tricky keeping up with his stream of consciousness across a crackly Transatlantic phone line, as he drifts quickly from subject to subject, album to album, artist to artist. “The thing is,” he says, “I listened to the radio a lot as a kid, so I don’t have a big picture of a bunch of albums in my head. I’ve always been more about songs than whole albums.”

Singers, too. Here the former Shrapnel shredder, Poison/Mr Big dep, session gun and Winery Dog recalls the albums that have had a lasting effect on him, and as you might expect he won’t just lay down a conventional rundown of the usual greats.

Lest we forget, he’s been a solo artist for the best part of three decades, and his choices very much reflect his own broad musical range. “I suppose all us Shrapnel guys – me, Jason Becker, Greg Howe – influenced each other, but I don’t dissect my influences, or even have to think about it. Over the span of my career, I was focused on guitar for a very short, concentrated period of time. Then I became much more interested in singers and songwriters…”

I know it’s not rock record per se, but this was the first album that influenced me most at the youngest point in my life. My favourite track is Maybe Your Baby – the bass synth and the rhythm section really excited me.

I know Jeff Beck played on the record too, there are some great guitar parts it. Stevie was also the first concert I went to, at the Valley Forge Music Fare in Pennsylvania around 1983.

And I saw George Benson at the same venue the following year. My mother had a copy of Breezin’ and I played it a lot as a kid – I would’ve been in single figures at the time. Great songs on there, Six To Four and This Masquerade.

One thing I definitely did try to emulate was the way he sang and played in unison, he did that so well. To this day a lot of times when I’m playing I’m singing the lines to myself.

The irony is I didn’t know who Eddie Van Halen was until I heard Beat It by Michael Jackson. That’s how backwards I was when it came to guitar! Beat It is what first exposed me to Eddie, and then I got into Van Halen. Their first record’s a classic, such great songs – Ice Cream Man, You Really Got Me…

Maiden was the first heavy metal/rock ‘n’ roll concert that I went to. I loved The Number Of The Beast – I’d play that record every morning before I went to school when I was in seventh and eighth grade.

Steve Morse is an amazing player, he really influenced me compositionally and as a guitarist back then. People often ask me about my influences, but I’ve been playing for 40 years and I don’t even really know what my influences are any more; my mind’s so far removed from when I was first learning and discovering.

But Steve Morse was there, on Industry Standard and later The Introduction, the first album from his solo band.

I still like the rawness of this record, and the songs – That’s All Right, Maggie May – were great. But this one changed things for me because Rod was one of the first singers I tried to emulate. It was him and Paul Rodgers – I remember covering Free’s Fire And Water as a kid and trying hard to emulate Paul, but for me Rod was the first.

When I turned 19 I became less and less interested in guitar players and got way more interested in singers. I moved to Los Angeles in the early 90s and I remember taking this with me.

The thing is, I wouldn’t always have an artist’s album, I’d have, say, a Motown best of, a Stax best of, or an anthology like this. The Black Sabbath album I’d play on loop was their compilation album, We Sold Our Soul For Rock ‘n’ Roll, the one with a really creepy picture on the gatefold…

This album and the movie changed a lot of musicians’ lives. Prince was probably the most inspirational character in the history of music for me. He had every element – not only could he dance and perform, but he could write great, sing great, play multiple instruments, and he could produce and engineer himself.

He had every single aspect of being an artist, a creative entity, covered. You should be able to go into a studio and come out with a piece of work, and so many people can’t. I listened to this one and Sign O’ The Times over and over again.

I didn’t connect with his earlier punkier stuff, there was something about it I didn’t really get. Then later I saw him do an unplugged thing and got into him after that. This one’s a really great record. This one and Spike, those are the albums of his I played a lot.The one I really like on here is So Like Candy. His lyrics are great, really inspiring.

I loved David Bowie’s music, but I didn’t really follow him. People like Bowie, Bruce Springsteen, The Police, when you’re growing up they’re just part of life, like the trees and the air.

Young Americans, Changes come on the radio and they’re just part of the environment, and you almost look for other, less obviously outstanding things. But this… the title song in particular was so unique and so interesting. Right at the end of his life, it reaffirmed him as anything but a typical pop artist.