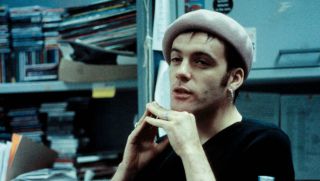 On February 1, 1995, both he and frontman James Dean Bradfield were due to fly to the US for a promotional tour. Edwards checked out of a London hotel and was never seen again. Many assumed he had taken his own life, after his Vauxhall Cavalier was later found abandoned at the Severn Bridge. However, a body was never found and he was officially declared ‘presumed dead’ 13 years later.

Just a few months before Edwards’ disappearance, Therapy? took the Manics out on a two-week tour of France and Spain. Here, frontman Andy Cairns pays tribute to the man and his legacy…

Why did you choose the Manics to take on tour in Europe?

“I’d known James [Dean Bradfield] for a year or so and we’d always meet up for a drink. He’d given me a promo cassette of The Holy Bible, just before we did Monsters Of Rock in 1994. I’d been listening to it intently. In fact, we listened to Faster and PCP in the dressing room before we played Donington.

At that point in time, we were more popular than the Manics in certain places in Europe, and towards the end of August that year, we’d been chatting about them touring with us. I was such a huge fan of the band and James’ guitar playing, so it was a no-brainer. I’d met the whole band before quite a few times, and I’d always got on well with them. What I liked about them was that they were fiercely intelligent.

They were very, very bright working class lads who didn’t have any sense of arrogance or entitlement, unlike so many other rock stars I’d met. It was because of their background. To be honest, it could be quite intimidating, but they weren’t like that at all, once you met them.

How did the crowd receive them?

How did the crowd receive them?

“Around that year, we’d crossed over from an indie and punk crowd and were starting to get a lot more of a heavy metal crowd. I think a lot of the Gallic metallers found it quite difficult. [The Manics] didn’t go down badly, don’t get me wrong. I know James enjoyed it, but I think they found it quite hard work.

“After they left us, they got some more European dates with Suede and they definitely found that a lot more enjoyable. I think the Suede audience was a lot more compatible and I think they had a lot more fun doing that stretch of it. I could certainly tell that some of our audience didn’t get it.

We’d be somewhere in France and James was wearing a sailor’s suit and Gallic men in the audience were confused. I remember Richey was wearing a T-shirt with a Fairy Liquid logo, but Liquid was taken off – so it just said ‘Fairy’. You can imagine Dominique down the front in his Pantera shirt would’ve found this quite strange. But I was really, really glad they came. I just wish it had been better for them.”

“On 22nd of September 1994 – my birthday – we played the Rouen Exo 7. This was the third gig of the tour and I hadn’t really seen Richey, Nicky [Wire, bassist] or Sean [Moore, drums]. I’d only really seen James the night before. I’d watched the two previous gigs, and I remember bumping into Richey and I had a couple of books under my arm and he asked me what I was reading.

I was reading The Story Of O by Pauline Réage, which he had, and I had this book called Dark Eros: Imagination of Sadism by Thomas Moore. It’s a philosophy about the dark side of love and the dark side of sex; he’d never seen it before. So I said, ‘You can borrow that, if you want’ so he took it off with him.

“Richey gave me a couple of books. He gave me Elegy Written In A Country Church by Thomas Gray – which he signed ‘Love Richey’ – and a William Blake poetry book and that was just really nice. And James gave me Yakuza Diary: Doing Time in the Japanese Underworld by Christopher Seymour and Nicky gave me a poem by Tennessee Williams called Lament For The Moths – it was all very lovely.

“He and Nick never went out with us after the shows, though. They always seemed to have early nights. We did have a table football tournament which he took part in. That was quite good fun. There was nothing untoward went on and there was no inkling, certainly among us, that Richey wasn’t in a good place. It was a really good two weeks.”

What was your perception of Richey before meeting him?

“Well, we’d recorded Nurse in 1992 at Loco Studio which was just outside Newport and at that point in time, I was already a massive Manics fan. Michael [McKeegan, bassist] liked them, too.

I loved the lyrics and I got into Generation Terrorists but I had never met them at this point. I do remember everyone I’d met said they were absolutely lovely, that they’re really nice lads. I thought if I met them they might be a bit more cruel, more sneering and a bit more middle class.

But they weren’t. They were very, very decent people. I think I met him early in 1993 with James and he was very quiet and had a good sense of humour. We had a drink at the bar – I think it was at the Forum in Kentish Town, that was the first time I met him – and then after that I bumped into him quite a few more times. I never saw any side of him which suggested to me the rock ’n’ roll myth that surrounded him.”

What was it about Richey's lyrics that drew you in?

“Well, they were completely unusual at the time. I like bands with a bit of integrity and decency. The nearest I had to that at the time was Fugazi. Whenever I read the lyrics, I thought, this isn’t a cock rock band, this is unusual.

As I mentioned earlier, the album that got it for me was The Holy Bible. I’d had the demo tape for a while, so I knew the melodies inside out. As a Manic Street Preachers fan, I bought it the day it was released and brought it home. I just felt the lyrics were beyond being clever; they were just completely amazing and insightful.

I never knew what the opening line of Yes was but when you see it written down it’s just like, ‘Jesus Christ’… ‘For sale / Dumb c—ts, same dumb questions’. I was totally fascinated by his words and it’s one of those records that’s taken on more resonance as the years have gone on.

You played Reading Festival in 1994, the same weekend The Manics were reduced to a trio when Rickey entered rehab. Did you know what was happening?

“I didn’t know where he’d gone, but obviously it was none of my business. But I thought they pulled it off as a three-piece and I thought that it was extremely brave of them. But then again, nobody could have seen then what was going to happen in February the following year. No-one could have predicted that at all.”

When did you find out he'd gone missing?

“I found out from James. I think it was the day after he’d gone missing, because I phoned him. We were in Real World Studios, just outside Bath. Me and James would speak on the phone once every fortnight or so.

We’d done that tour and we’d kept in touch over Christmas. When we were doing the Infernal Love album, I phoned James just for a catch up and was like, ‘How are you doing? How are things? How was your Christmas?’.

He was like, ‘Something weird’s just happened’, and he told me the whole Richey story. It was weird because they were staying at the Embassy Hotel in Bayswater – that’s where Therapy? used to stay.

We would run into the Manics in the bar there, so when he was describing where they were and what happened, I could kind of see it in mind.”

How did you feel about the band using his lyrics on the 2009 album, Journal For Plague Lovers?

“Personally, I felt as a fan that the time was right, because they’d made quite a few albums in between and they’d stretched the musical landscape out so much. I think it was about time. I can’t imagine how difficult it would have been.

We’ve been through various members but none of them have ever disappeared. I think there must be a point when you think, ’Can we do this? Can we get away with it? How painful is it going to be?’ And I have a lot of admiration for them doing it.

They’re a bunch of very, very fiercely intelligent men who care a lot about each other and that must have made it all the more difficult.”

What song would you remember Richey by?

“I’d go with Stay Beautiful, because I think that’s quite apt.”