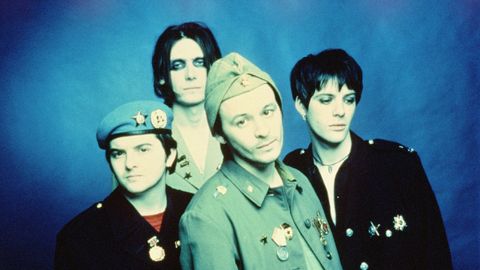 Tragedy adds a morbid magnitude to art, but Manic Street Preachers’ The Holy Bible was a classic even before it became a self-fulfilling prophesy. Having weathered a slight backlash over the plush pomp of 1993’s second album Gold Against The Soul, they holed up in Cardiff’s tiny, tinny Sound Space Studios, determined to re-channel Magazine, Joy Division, Wire and PiL. Cue an urgent, black metallic masterpiece of scorched industrial fury.

That its re-release comes closer to the 20th anniversary of lyricist Richey Edwards’ disappearance than the August 1994 release date is no accident – The Holy Bible was undoubtedly Richey’s devastating final testament. As he struggled with anorexia, alcoholism and depression, harrowing tracks such as 4st 7lb and Die In The Summertime provided unflinching insight into a psyche fast on the slide.

Though in 2015 there’s a sense of rocking out in Richey’s honour, even separated from the sad events that surround it, The Holy Bible’s undated viscera still glistens as sticky and fresh as it did in ’94. It stands alongside Nirvana’s In Utero as an uncompromising slab of foul, rust-mouthed beauty; an open rock wound in a decade that was increasingly patching over its troubles with the cartoon plasters of Britpop.

Elsewhere in the package, the disc of B-sides – largely live versions and alternative mixes of earlier singles – adds little to the story besides a ramshackle live cover of Suede’s The Drowners, the vitriolic ska Sculpture Of Man uncaging their inner Offspring, and the glaring signs of their future acoustic slump towards the mainstream on Too Cold Here and Love Torn Us Under.

But the final live disc from the Astoria in ’94 is the hidden gold, a blast of glowering glory from a band unknowingly teetering on the edge./o:p