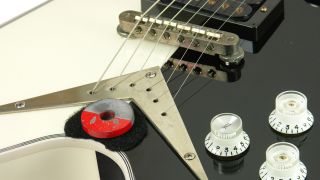 Dean Guitars are the brainchild of Dean B Zelinsky, an American who began designing and building prototypes way back in 1976. Dean made their name on the basis of three designs: the Z, which resembled the Gibson Explorer, the far flashier ML, famously used by Dimebag Darrell, and the V, which… well, you get the idea. The Les Paul-like Cadillac was introduced in 1978.

Anyone who was anyone in US rock could often be seen in a stadium somewhere, a Dean guitar in hand.

Today you can get hold of all manner of signature models and differently priced instruments from across Dean’s catalogue. Michael Schenker’s signature series comprises seven guitars. Top of the class is this limited-edition V that celebrates the guitarist’s 10 years with the company. It’s from the USA Series, a range that always makes guitarists get hot under the wallet, and is loosely based on Schenker’s personal guitar. As such it features an MSG decal, and the same metal disc – that’s it velcroed behind the bridge – that Schenker uses for slide notes and various sound effects.

The hardware, fashioned from nickel, has been aged and looks great, as do the pickups, which are a pair of Dean’s own Schenker Light’s Out humbuckers, the metal polepieces of which have been rusted.

Made wholly from mahogany it’s a substantial yet perfectly balanced guitar and eminently playable instrument that sounds wonderful; all warmth from the wood and attack from the ceramic pickups.

Only 75 are being produced worldwide, so you’ll need to be quick to even get a sniff of one, but owning one will be worth it. You can obtain availability and pricing details from UK Deansters Bill Lewington (01268 413366), and be prepared to pay well more than £3,500.

Gibson never did produce a Michael Schenker signature to mark his years playing the Flying V. Now Dean have given him a guitar worthy of his status as a truly great player.