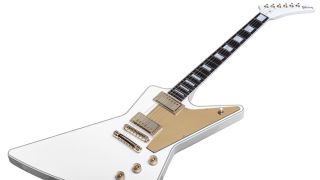 Even today the Gibson Explorer is regarded as somewhat ‘out there’ as far as its looks go.

Its thick mahogany body, all angles and attitude, works with an elongated headstock, resulting in what is arguably the ultimate metal instrument. Perhaps surprisingly, though, it was first introduced way back in 1958 as part of a trio of new Gibson models that included the equally iconic Flying V and the now mythical Moderne. In fact, the latter is so rare that there are doubts that any examples from the late 50s even survive today. If you come across one in your loft, you could probably buy Bermuda with the proceeds.

Many of rock’s biggest names have been seen with an Explorer – even Eddie Van Halen used an exact copy made by Ibanez on VH’s kinetic debut and associated tour. Although the appeal of its vibe is easy to see, the sheer amount of mahogany tonewood used gives the instrument a massive tone too.

The latest addition to the Explorer family is this eye-popping beauty, the signature model of Halestorm mainwoman Lzzy Hale. And right off the bat you’re struck by how classy it looks. You can’t go wrong with an Alpine finish augmented with gold hardware, and subtle touches such as the body’s black pinstripe binding and block (rather than dot) fret markers on this model elevate the 56-year-old design to a higher plane.

Pickups are a pair of Gibson’s ’57 Classic humbuckers, with the unit in the bridge wound slightly hotter to enable the tone to cut through the thickness of the body mahogany.

Elsewhere the spec is pretty traditional and includes three speed-knob controls, a tuneomatic bridge and stoptail array, and a set of Grover tuners. All, needless to say, are finished in gold, and as a whole the guitar is coolness personified.

If you reckon you have the charisma to pull it off it will set you back £1,699, but you’ll have your audience begging for a closer look should you strap one on at the next session of your local jam night.

Close to The Edge

A young lad called Dave Evans came across a 1976 Explorer in New York. He was soon to reinvent himself as the Edge, and his band, U2, have gone on to become arguably the biggest in the world. That Explorer was the first guitar he ever recorded with.

In an interview with MusicRadar.com, Edge’s long-time guitar tech Dallas Schoo sheds some light on the guitar’s appeal: “The right ones are hard to find because Gibson had two different Explorers in production that year. The ones that were produced between June and December had a thin neck, but the models that were produced during the first part of that year had a thick baseball bat neck, and those are the ones Edge prefers. Gibson didn’t make many of them, so people hang on to them.”