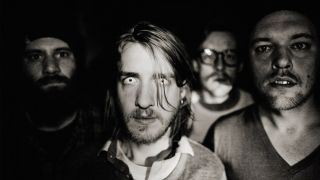 Is it written into Ghent’s legislature that any band forming within its city limits are bound by law to skirt around the edges of rock’s myriad sub-genres?

In the last couple of decades, the East Flanders province has burped out bands of note like Evil Superstar and Soulwax, and now, our attentions turn to its hottest new export: Raketkanon.

Baby Godzilla’s Matt Reynolds has shared stages with the Ghent foursome, and he bloody loves them.

“Their hooks are bizarrely huge”, says Reynolds. “In such a way that you find yourself trying to comprehend what all of these strange noises are. On one hand they’re capable of hammering out huge crushing riffs, but then there’s also elements of tech-y math-rock in there too. Honestly, they sound like they’re from another planet.”

Blood Red Shoes’ Steven Ansell likes Raketkanon so much that he decided to give their latest single, Florent, a UK release via his band’s own record label, Jazz Life. “We heard their first album (RKTKN#1) through some friends we met on tour in Belgium,” explains the drummer. “Laura-Mary (Carter, guitar/vocals) and I both really liked how brutal and weird it was. When we heard they were recording their new one with Steve Albini, we thought we’ve gotta release [something] and help get them noticed in the UK.”

The four-piece – made up of Pieter-Paul Devos (vocals), Jef Verbeeck (guitar), Lode Vlaeminck (synth-bass) and Pieter de Wilde (drums) – began gaining attention in their home country after the release of their debut album in 2013. The 10 songs on RKTKN#1 channels the likes of the Melvins, Refused, Tool and the Butthole Surfers into a distinct and original blend of noise rock, punk and experimental electronica. The result is mayhem.

“We make music without boundaries,” says Raketkanon singer Pieter-Paul Devos. “The process of creation happens together and everyone is free to do what they feel. If people think that we make noise, that’s cool. But for us, our music is just a way to express ourselves. We think melody and intensity are two important things to keep in mind. Our musical vision is pretty abstract. We’re all about intensity and sincere emotion.”

That “musical vision” is characterised by a compelling tapestry of noise and dramatic textures that threaten to unravel at any moment. Crushing onslaughts of dischordant din are underscored by psychedelic drones, warped synthesisers, and progressive breakdowns, generating a sense of danger that’s lacking in so many of today’s guitar-based bands.

“They take elements of really heavy doom or ‘90s bands like The Jesus Lizard, but they make it sound modern,” explains Steven Ansell from Blood Red Shoes. “To me they’re a kind of heavy as fuck version of Liars; they’ve got that experimental edge where they manipulate the voice or use a synth instead of bass guitar, so it’s never like a conventional rock band. But they still keep all that weight and intensity. I really think they stepped it up with the second album.”

Recorded in Chicago last year with sonic alchemist Steve Albini (Big Black, Shellac), RKTKN#2 married the sludgy, untamed noise rock of their debut with the kind of dark, post-punk bass lines and jolting beats reminiscent of Joy Division, Wire and Gang Of Four. Producing an even wider array of sounds and flavours, it’s an album that requires repeat listens to fully appreciate its scope, but the end result is transfixing. It’s a simmering, seductive, cinematic canvas of sounds, and fresh and exhilarating listen from start to end.

“The first album was a studio album”, explains frontman Devos. “We all did our thing and made our sound while recording, so the process happened in separate layers. After two years of playing gigs, we really felt that was our thing. So we decided that the most obvious thing to do was a live album. That’s why we went to Steve Albini. We did several pre-productions to really fine tune our songs and then, with every little detail in place, we went in and tracked it all down, together, in one big live session. For us, that’s the most honest way to do it, and we believe you can hear really it on the second record. Listen with good headphones and it’ll be like you are standing in the middle of the room where we’re playing.”

Baby Godzilla’s Matt describes their live show as “unbridled visceral intensity”. And he’s no stranger to going berserk on stage. The Nottingham quartet have been wrecking venues for some time, but after playing three gigs with the Ghent foursome in Belgium earlier this year, even he was blown away by their “impossibly brutal” stage presence. Similarly, Ansell from Blood Red Shoes describes the Raketkanon live show as “damn frightening” and “intense”.

“The audience is a great factor for us”, says Devos. “We’ve played those inevitable shows with three people in the audience, of whom two are our friends and the third one is this guy coincidently checking the decibel limits for that night – and those shows can be killer. Really. But when there’s an audience actually waiting to see us, and the energy we put out comes back to us, then the loop is infinite. Everything is possible. That’s what makes this band so unpredictable. Sometimes I run into the crowd to our mixer to say sweet words in his ear, improvising because we fuck up a part of a song. Playing live is always exciting. It’s nice to play parts differently, to kiss each other, to do what we want – that’s Raketkanon.”

And with music and live shows as incendiary and uncompromising as theirs, what are their long-term goals? Do they aspire to break out of the underground? “We don’t think in terms of mainstream or underground”, Devos says. “For us, this band is our life, our baby. Everyone is welcome. We’re not part of a scene. Our fan base is so miscellaneous and that’s one of the greatest compliments we could have. Everybody can get into our music!”

Raketkanon are on tour now.