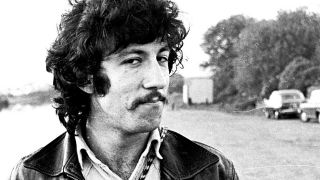 Peter Green was losing his mind. Excessive LSD use was starting to take its toll. By late 1968, his bandmates in the band he had founded, Fleetwood Mac, had become concerned about Green’s mental state. He was growing distant, was sometimes incoherent, and had begun wearing robes and a crucifix.

By 1969, Fleetwood Mac’s founder and main songwriter had provided the band with a No. 1 hit single (Albatross), as well as two No. 2 singles (Oh Well and Man Of The World). But in the wake of those successes, the guitarist was becoming estranged from the rest of his band, and was increasingly fixated on the morality of the band’s recent financial success.

A three-day LSD binge at a commune in Munich in early 1970 greatly exacerbated Green’s mental descent into schizophrenia.

Around this time, Green wrote a song called The Green Manalishi (With The Two Prong Crown after waking from an acid-induced nightmare in which a green dog that Green ‘understood’ represented both money and the Devil, barked at him.

In the dream, the dog was dead, as was Green himself; eventually Green won the struggle to return to his living body in order to wake from the nightmare (hey, this is acid, folks). Green awoke from the dream and immediately wrote Fleetwood Mac’s next hit single. The song would reach No. 10 in the UK.

Before the song became Fleetwood Mac’s fourth consecutive Top Ten single, Peter Green quit the band he had founded. Mick Fleetwood remembers Green demanding that the band give away all their money; specifically, that they use their money to help end world hunger.

Green also insisted that he be the one to give the aid to the poor and hungry, in order to avoid charitable organisations, who he did not trust. After the rest of the band refused, Peter Green left the band.

Peter Green was an integral part of the British Blues Boom on the mid-to-late ’60’s. He replaced Eric Clapton in John Mayall’s Blues Breakers, and formed Fleetwood Mac in 1967. Metal historians agree that these bands (along with fellow Brits the Yardbirds) laid the groundwork for the evolution of Heavy Metal music.

Follow that evolutionary path into the mid-70’s, and you’ll eventually encounter The Beast that is Birmingham's Judas Priest.

Heavy Metal had come a long way in a short time, quickly morphing from ‘white boy blues’ into a valid genre unto itself in just a few years. Priest were pivotal in metal’s evolution; their second album, 1976’s Sad Wings of Destiny, is a landmark in the development of the form in that it steps away from the genre’s blues roots and into a sound and style unique unto itself.

Someone at CBS Records recognised the genius at work on SWOD and signed Judas Priest to a multi-album deal. Their next album, Sin After Sin, was another groundbreaking heavy metal record, but their new label was interested in commerce at least as much as they were in art. CBS insisted that the band record a cover song to attempt to garner some airplay. Producer Roger Glover suggested Joan Baez’s haunting Diamonds and Rust, and the rest is history.

For album number four, 1978’s Stained Class, the label once again insisted on a track to push to radio; Better By You, Better Than Me, written by Gary Wright (the man behind the 1976 US hit Dream Weaver) and originally recorded by Spooky Tooth, was recorded at the 12th hour with a different producer, and tacked onto the already-completed record.

Did including these cover versions deliver the results that CBS was looking for? No. Neither of these covers were ‘hits’; neither charted at all, anywhere. But the execs at CBS took no chances with the band’s fifth album, entitled Killing Machine. Released a scant 10 months after Stained Class, Machine revealed some major concessions by the band in the songwriting department, but CBS was still unhappy with the album as a whole, at least in terms of its ‘commercial potential’ in the US.

The label, uneasy with the original’s murderous implications, changed the title of the record for the US market to Hell Bent For Leather’. CBS also pushed for yet another cover. The Gun’s Race With the Devil (later a UK hit for Girlschool) was demoed, but was dropped in favour of The Green Manalishi.

Judas Priest transformed Peter Green’s haunting, acid-induced warning of the evils of wealth into a crushing juggernaut of menace and melody. The song is gathered up and rewritten into a cast-iron structure and rolls along like a Sherman tank.

Green’s mysterious ‘Manalishi’ character turns from the psychedelic money is the Devil in a dead barking dog into another one of Priest’s fantasy/sci-fi hero/prophet/saviour/doomsayer figures, the latest in a long line of exciters, dreamer/deceivers, sinners, rippers, aggressors and starbreakers.

How ironic that Judas Priest, historically important for removing much of the blues from Heavy Metal, would record a song written by one of the most renowned British blues guitarists of all time.

The fact that the song translates across genres so well speaks less about any debt Judas Priest owes to blues music and more about Peter Green’s compositional contributions to heavy metal… a genre which hadn’t even come into being. And one final irony: the song was being used in an attempt to bring band and label increased financial success.

This feature was originally published at the excellent Mayonoise blog.