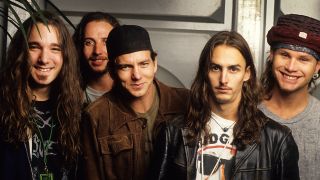 Pearl Jam are grunge’s great survivors. Unlike Nirvana, Soundgarden, Alice In Chains and the other major bands from the Seattle scene’s graduating class of 1991, they’ve never gone away, either permanently or temporarily. And while they’ve endured their share of traumas – not least the deaths of so many friends and contemporaries – they’ve ridden them out.

But then resilience is part of Pearl Jam’s DNA. They were born in tough circumstances: guitarist Stone Gossard and bassist Jeff Ament were previously members of Mother Love Bone, whose career had barely got out of the traps when singer Andrew Wood fatally OD’d.

They turned their grief into hope, channelling it into multimillion-selling debut album Ten, only to be disparaged by the gatekeepers of cool as grunge fifth columnists. Much of the scorn was directed at singer Eddie Vedder, the San Diego surf rat seen as an interloper in the insular north-west scene. His rich baritone and heart-on-sleeve sincerity sat at the opposite end of the spectrum to Kurt Cobain’s weaponised irony and punk-rock sneer.

The derision didn’t dent Pearl Jam’s rise – their second album, 1993’s Vs., sold nearly a million copies in its first week. But Vedder in particular hated their success. The band pushed back hard against it, refusing to make videos or be interviewed.

By late 90s the insanity was starting to fade and things had reverted to something approaching normality. Their record sales were a fraction of what they once were – 1998’s Yield sold a million copies compared, to Ten’s eventual 13 million – and you suspect no one was happier about that than Pearl Jam.

There were still hard times to endure, not least the tragedy of nine fans who were crushed to death during the band’s set at Denmark’s Roskilde festival in 2000. But for the most part their troubles were largely behind them.

Since the turn of the millennium, Pearl Jam have existed outside the mainstream music industry. These days much of the band’s potency comes from their devotional live shows rather than from the commercial impact of their albums, repositioning them as a kind of Gen-X Grateful Dead (they were one of the first bands to make recordings of their gigs available to fans as ‘official bootlegs’). But it underlines that Pearl Jam in 2019 are much the same as Pearl Jam in 1991: a band of the people, for the people.

Pearl Jam’s debut is one of the great albums. Where their peers wielded irony like a weapon, Ten wore its earnestness as a badge, yoking Eddie Vedder’s magnetic intensity to songs that were anthemic (Even Flow), empathetic (Jeremy, inspired by a school shooting) and brooding (Black).

Their debt to the unfashionable rock bands of the past provided ammo for their detractors – Alive was snidely pegged ‘the grunge Free Bird’, disregarding the personal heartbreak at its core. But Ten sold in the millions and Pearl Jam had the last laugh, even if would prove to be a bitter one.View Deal

Three albums in, and no one hated Pearl Jam more than Pearl Jam. Vitalogy was a determined attempt to destroy everything they’d built. The only problem was that they were incapable of making a bad record.

The first single, Spin The Black Circle, was a blast of punky noise designed not to be played on the radio (it didn’t work), the wheezing Bugs was crazy. But the surface abrasion of Last Exit and Corduroy couldn’t hide their arena-rock hearts, while the album’s triptych of slow burners – Better Man, Immortality and Nothingman – are among the best songs they’ve written.View Deal

Success blind-sided Pearl Jam. As the title indicated, Vs. was the sound of band of who wanted to kick against fame. They dialled down the grand emoting. The album clanked and rattled to life with opener Go, and Blood was a blast of petulant fury that wouldn’t have sounded out of place on a Nirvana album.

Yet they couldn’t quite throw the baby out with the bath water. Rearviewmirror and the plaintive Elderly Woman Behind The Counter In A Small Town gave lie to the notion that Pearl Jam were anything other than an arena rock band, and a classy one at that.View Deal

Pearl Jam’s fascinating, occasionally brilliant fourth album sounds like nothing they made before or since. Recorded against a backdrop of intra-band turmoil – Vedder had reportedly wrested artistic control – its default setting was low-key. But ‘quiet’ didn’t necessarily mean ‘bad’. Opener Sometimes and the Afro-beat-tinged Who You Are exuded calm beauty, while the furious Hail, Hail proved they could still crank it up.

No Code baffled many who’d bought Ten and Vs., and the band’s sales took a downturn. For Pearl Jam, though, that counted as a victory.View Deal

After the stylistic left turn and subsequent commercial failure of No Code, the band’s fifth album was a corrective.

While there were still low-key moments – Given To Fly is Led Zeppelin’s Going To California given a 90s makeover – the band toughened up their approach on the garagey Brain Of J. and Do The Evolution, even if they stopped short of returning to the emotional scale of Ten.

Significantly, Yield marked a shift in the power balance – Vedder abdicated responsibility as chief decision maker, lightening the mood within the group, and Pearl Jam were a band again.View Deal

All four of Pearl Jam’s noughties albums were good, but none were outstanding. And none came close to Vedder’s debut solo record.

The stripped-back soundtrack to the man-versus-nature film Into The Wild, it mirrored the untamed beauty of the film’s Alaskan setting perfectly. Vedder played the majority of the instruments himself, adding to the sense of isolation.

Far Behind and the gleaming Hard Sun came on like a windswept Pearl Jam, but the delicate Rise and The Wolf had a panoramic grace that was all their own.View Deal

The first and best album from Stone Gossard’s long-running side project: a set of slinky, intimate songs that sat poles apart from Pearl Jam’s arms-wide-open grandstanding.

Gossard was the marquee name, but singer/keyboard player Shawn Smith proved to be the real star. His fabulously smoky voice was equally at home with somnambulant ballads like Buttercup as it was on hazy funk rock workouts like 20th Century.

No one expected Shame to deliver Pearl Jam sales, and it didn’t disappoint on that front. But Gossard never sounded like he was enjoying himself quite so much again.View Deal

Aka The Avocado Cover. In truth, the fruit was the only thing that really distinguished it from 2000’s Binaural, 2002’s Riot Act and 2009’s Backspacer, a run of albums that found Pearl Jam in a holding pattern, albeit a high-quality one. Their records were still great, but they were no longer indispensable.

The opening pair of Life Wasted and World Wide Suicide were fuzzy and propulsive, while Gone provided the requisite moment of quiet reflection. But the urgency that once drove Pearl Jam seemed to be concentrated in their gigs and their countless live recordings.View Deal

Pearl Jam’s most recent studio album was their best in 15 years. That was in part down to Sirens, a chiming, unadorned love song that provided a completely different emotional punch to the great ballads of Ten, Vs. and Vitalogy.

But this was more than just a one-song record. The rocket-fuelled Mind Your Manners found Stone Gossard and Mike McCready letting loose with some unembarrassed soloing, My Father’s Son benefitted from the presence of keyboard player/unofficial sixth member Boom Gasper, and closing track Future carried emotional weight without being dragged under by it. View Deal