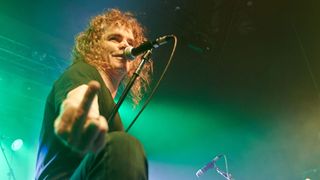 Look up “heavy metal lifers” in the dictionary (if there was such an entry…), and Overkill would undoubtedly be included. Since issuing their now-classic Feel The Fire debut in 1985, the band has never wandered far from metal, and in February 2017 they unleashed their 18th studio album, The Grinding Wheel.

On the eve of its release, singer/screamer Bobby “Blitz” Ellsworth looked back on some records from other artists that have been an influence throughout those three decades.

The first record that flipped my wig was Alice Cooper’s Killer. It was something that I got my hands on probably by saving my allowance and had to keep under my bed. And I think the reason it was that monumental for me was it was “the forbidden” - especially if you were raised in a second-generation Irish-Catholic family. It had to be between the mattress and the box spring. Just pure, good old, American raunch n’ roll.

I got my hands on a record called Performance, and it was recorded at the Fillmore: live Humble Pie. This is Steve Marriott and Peter Frampton. It was the British answer to American blues-rock. It was a really cool rendition of old blues covers, that were picked up with distorted guitars, and some of their originals. The song that sticks out on it is “I Don’t Need No Doctor,” which is something really gritty. It almost sounded American from the Brits, which I thought was cool.

On this was the whole groundbreaking guitar tone thing, that attracted every kid the first time they heard Iommi’s guitar. If they were going to go on — not just appreciating Black Sabbath but going on and doing something with music later on — then this was probably the inspirational thing. And the song that was most outstanding on it, that influenced generations to come, was Children of the Grave. Just unbelievable.

This was based on Lou Reed being this “avant-garde/never knew where he was coming from” kind of a thing. When this came out, there were these two guitar players - Dick Wagner and Steve Hunter - and these guys were the first time that I heard harmonies from guitarists playing together. There is an intro to a song called Sweet Jane, and these guys play for about seven minutes of the introduction, which to me, was just jaw-dropping as a teenager looking for girls and heavier stuff at that particular time.

Into high school, and The Ramones show up. I think being a guy from the New Jersey/New York area, I kind of considered them “a local band” at that time. In a 24-month period, there were like four Ramones records released - it was almost exactly the same song, but it was so exciting every time. But I think the one that really grabbed me was Rocket to Russia. That as their third record. There was just something real special about that energy, and it was probably where I look back to when Overkill started fusing together heavy distorted British guitars and that New York punk energy.

My first concert was in 1975. I was fifteen-years-old, and it was Queen at the Capitol Theater. This was kind of life-changing. I had Sheer Heart Attack, that was the tour. So it was their second time over on U.S. soil - I think they had done something with Mott the Hoople the year before. I knew Sheer Heart Attack inside out - Killer Queen, Brighton Rock, Stone Cold Crazy. I was blown away. The concert melted into the record and it was almost life-changing to see such a fantastic performance from an iconic band before they were actually iconic - in a 3,000-seater.

Something that really grabbed me was the New York Dolls record. Probably some of the most lousy musicianship you’re ever going to hear on a record, but what great energy. It was the first Dolls record, and I love that whole punk thing and the reason why it was happening in New York. I was a formidable teenager who was looking to go to college and I remember at the time, I was looking at places that had music scenes - whether it be San Francisco, New York. I chose New York because of that whole punk scene - I ended up going to Manhattan College in the Bronx, because I could take the 1 train down and get to Max’s Kansas City or CBGB’s, and try to do some Debbie Harry spotting on the street.

My first real introduction to metal that blew my mind - and I remember this back in the days of excess, and it would be with beers and a bong - was Judas Priest’s Sad Wings of Destiny. And now, all of that guitar harmony stuff that I mentioned about with Hunter and Wager and the Lou Reed record, really came to light for me. Because it was Tipton and Downing doing this stuff on the introduction to The Ripper or Victim of Changes. The stuff that became iconic tunes, again, before this band was even iconic. And somewhere there, when I hear this, I always remember Overkill as being somewhere between that Ramones leather jacket and that British sound that turned everything on its ear.

The next one is going to be a live record, it’s right around the time that Overkill had started - No Sleep ’til Hammersmith by Motörhead. It was the epitome of “live” to me. The record sounded dirty. I mean, you could almost smell it when you put in on the turntable. And every one of these things I’m talking about is vinyl - and would have a back-up on cassette when I started to drive. But No Sleep ’til Hammersmith is what got me into Motörhead, and it was an epiphany. I always loved that about punk because it was raw and wasn’t perfect. Well, when you got to the rock n’ roll/metal of Motörhead, being that dirty and not being perfect, the perfection was that it was not perfect.

I don’t really consider Judas Priest “New Wave of British Heavy Metal” - they had kind of carved their own niche by this point. But Maiden I think was really the epitome of the New Wave of British Heavy Metal. They did something really special with that sound, with those guitars, putting those melodies into it, having a mix that was totally different - when you heard the bass out in front, with regards to Steve Harris. And that first Iron Maiden record with Paul Di’Anno, it was something that you could feel that it was here to stay. I remember Overkill even doing covers off of that record, when we were just getting our wings. It was something that we wanted to be.