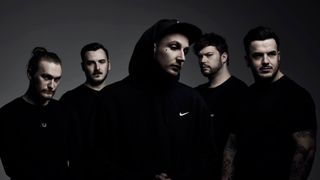 Southampton metalcore upstarts Our Hollow, Our Home are premiering their debut album Hartsick exclusively with Metal Hammer. Hitting stores on March 3, it’s a 13-track slab of savage vocals and crushing breakdowns, and well worth a listen if your record collection leans toward the likes of Bury Tomorrow, Architects and Parkway Drive.

You can listen to the album in full right now. Go on!

To give us a deeper insight into the music, frontman Connor Hallisey breaks down the stories behind the album, one track at a time.

The Sea Will Sleep

“We wanted to start the record off without pulling any punches and doing what we do best. The eerie production you hear at the very beginning, along with the line ‘In a world that refuses to open its eyes, will you remain blind?’, is meant to make you feel unsettled and start questioning your own thoughts and opinions. Lyrically, self-reflection is a big topic throughout Hartsick, and we wanted that to resonate from start to finish.”

“This track was written about a close family member passing, and tackles the struggle with emotions we all have to face when dealing with the loss of a loved one. We wanted the track to be reflective and personal, but at the same time carry a sense of hope for the future.”

Throne To The Wolves

“…Wolves was written from the perspective of someone who has recently left behind a toxic relationship, where the bond between the two parties involved is causing more bad than it is good.”

“This track is one of the most lyrically controversial on the album. In a wider context, it tackles religion and the concept of blind faith. When writing tracks like this, Tobias (Young, guitar) and I write with the intention of our words being interpreted to reflect the listener’s own situation, but we wanted the underlying message in Worms Wood to be that of making up your mind about faith, not being forced into a religion or way of thinking by anyone else.”

“Hartsick is one of the more positive, anthem-like tracks on the record. We wrote about overcoming self doubt, facing up to your fears and demons, and knowing that even at your lowest low, there is always someone else who has felt the same way you do. And through it all, you are never alone.”

Feast For The Crows

“The first single we released from Hartsick back in November 2015. …Crows was written about letting go of someone you once stood by and considered a brother in arms, and learning to accept the loss of a friendship knowing there’s no hope of it being salvaged.”

“Karmadillo is probably the most energetic track on the record. Similar to …Crows, it tackles the difficult subject of discovering someone you thought could be trusted and was considered a friend is not the person you believed them to be. We shot the video for Karmadillo at Black Hangar Studios in the UK, where the Architects Naysayer music video was shot, as well as some scenes for Rogue One: A Star Wars Story!”

The Wild Will Wait

“This is the first and longest interlude track on the album, and is a piece Tobias had kept returning to during the writing process of Hartsick. It was also the only way he could fit a guitar solo into the album that worked, so props to Toby for managing to squeeze one in there!”

“Another track about self-reflection, this song is about accepting one’s own shortcomings and personal problems with the world, and moving forward in a positive mindset to tackle all that life throws at you. It’s one of the softer tracks you’ll find on Hartsick, and is my favourite chorus on the record.”

“Hands down the heaviest track on the album, it is written about revelling in the sadness and anger brought on by the betrayal of a lover, which is unfortunately something too many of us can relate to.”

“Web Weaver is probably the most personal track on the record for me. Tobias and I wrote the lyrics about the struggle of coping with anxiety and depression, two mental illnesses that plague so many minds in this day and age, and is a topic very close to all of our hearts.”

The Forest Will Fall

“This track serves as an extended introduction into Fox Blood, and sets the tone well for the madness about to unfold in the final track.”

“We really wanted to write an ‘old school’ metalcore track for the album, one that reminded us of bands we used to listen to when first starting bands. Lyrically, the track is a reflection on current politics, and after some of the controversial decisions made in 2016 by governments including our own, we felt there was pent up emotions we needed to voice on our part.”

They’ll be touring the UK at the following dates: