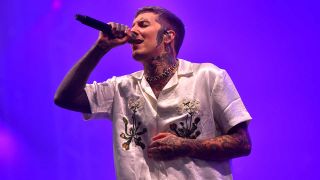 Since the release of comeback single Mantra, all eyes have been on Bring Me The Horizon to see what upcoming album Amo will bring. Following the band’s appearance at Reading festival, frontman Oli Sykes revealed to us that the single was inspired by the concept of love being like a cult.

Surely this doesn’t sound like a positive spin on human emotion?

“It’s not anti-love, it’s unbiased in that respect, it just explores stuff,” says Oli matter-of-factly. “I went through a divorce a couple of years ago and I was really reluctant to write about it, but in the end I needed to get it out of me and deal with it. Not that I was so broken up about it, but sometimes when you go through something traumatic, even when you think you’re over it you don’t realise what you’re still holding on to. Whether it’s the way you treat other people or losing trust, I thought I need to explore this myself so I can deal with it.

“It’s not really an angry record or anything like that, it’s more about looking at stuff and going over it and mentally dumping it. It goes in to stuff that’s not about me that’s more about society and stuff like that. You’ll find out.”

Much has been discussed online about the band’s sonic direction on Amo. Following the release of Mantra, Oli was quoted as saying the album is more experimental than anything the band have done before. But don’t expect an avant-garde jazz album.

“Our last record (That's The Spirit) we set out to make a record we could see ourselves playing in bigger venues – I like to call it a big-budget rock album –  and every song could have been a single,” says Oli with an air of pride. “I always looked up to Linkin Park’s Hybrid Theory where every song could be a single. I know some people don’t think that’s so cool, but I used to think that was amazing.

“With [Amo] it’s a bit different. We’ll write some songs that can be on the radio – we love to write those songs, it’s a challenge for us – but at the same time we’re gonna write some songs that throw everything out the window that you know about us. You couldn’t even edit it into a single if you wanted to. We’re gonna do whatever the fuck we want. In some aspects it’s a heavier record, which sounds so cliché, but it is.

“Don’t get me wrong, if anyone’s thinking we’re going to bring out a much heavier album, it’s not. There are some songs that are poppier than anything we’ve ever done before, but there are some songs that are weirder. Some that don’t even sound like rock songs, they’re still heavy and dark, but they tap into a different psyche and place. It sounds nothing like anything we’ve ever done before.”

Bring Me The Horizon are touring the UK in November and tickets are onsale now.