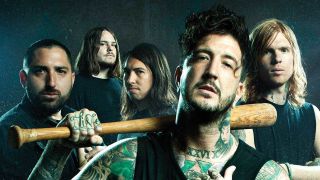 Of Mice & Men were on the cusp of breaking into the big leagues but tragic circumstances sidelined frontman Austin Carlile with dramatic health issues. Can they reclaim the throne that was rightly theirs?

You can order your copy of Metal Hammer magazine now – along with Devin Townsend 3D holocard, Tarja EP and the first ever Metal Hammer Activity Book!

In our exclusive interview with Of Mice & Men, we dig deep into the band’s new album Cold War and find out what Austin has been through over the past year. From his daily struggles with Marfan Syndrome to his recent life-altering surgery to his new-found faith in God, it’s been a tumultuous time for Austin and his band. But can they be saved?

This year is the 20th anniversary of Metallica’s most divisive album, Load. But how is it perceived in 2016? We revisit Metallica in the mid-90s when metal was deemed uncool so the world’s biggest band reinvented themselves stylistically, but was it all worth it? Let’s find out.

A genuine visionary and master of the craft, Devin Townsend has the power to shape and break convention in a heartbeat, but what goes on inside the mind of a genius? We dig deep into the psyche of the man himself to discover tales of hallucinations, drug-use, and mental illness.

Power metal might be deemed by some metalheads as just a little bit silly, but Sabaton are deadly serious when it comes to world domination. In their almost two-decade career they’ve become of the biggest, boldest and ballsiest bands in metal, and they’ve done it all with a fire in their belly. War is coming, and Sabaton are leading the charge.

The Amity Affliction have been slowly moving up the ranks in alternative music and their latest album This Could Be Heartbreak could be their break into the big time, but it didn’t happen easily. For years frontman Joel Birch struggled with depression and alcoholism, to such a point it almost cost him his life. Now, in the midst of a dramatic change, we find out what happened and what’s going to happen next.

But that’s not all, we’ve also got:

And much much more.

We’ve got a 3D holographic card from the new Devin Townsend album Transcendence!

A new and exclusive Tarja EP!

And best of all… THE VERY FIRST METAL HAMMER ACTIVITY BOOK! Just look at all the different puzzles and games and general heavy metal batshittery you can do!

And there are loads more where that came from! Can you find Tool’s new album? Can you help Gojira clean the ocean? Can you pin the nose on Chris Fehn? Find out!

Metal Hammer issue 287 is in stores now and available to purchase online.

You can also instantly read the articles from issue 287 of Metal Hammer and dive into the back issues right now on TeamRock+. And experience the interactive digital edition for your iPhone and iPad or Android device.