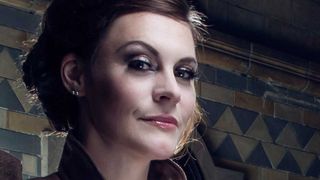 Floor Jansen has sung in two symphonic metal bands - she was the vocalist in After Forever and currently fronts up the biggest band in the genre, Nightwish - so you would expect her musical preferences to be stacked with choirs, orchestras and OTT drama.

But when we asked her to list the bands, albums and music that changed her life, she served us up quite a few surprises.

Nightwish's Human. :||: Nature. is out on April 10. They'll be playing at London’s SSE Arena Wembley on December 18, and Cardiff’s Motorpoint Arena on December 16. Tickets are on sale now.

"This album was the reason I started to form the idea in my brain that I could sing in a metal band. There‘s a song on it called Strange Machines and it got played on the radio when was I starting to get interested in metal.

"It was combination of that style of female vocals and heavy guitars. Anna Van Giersbergen’s voice was just … wow to me and hearing her sing on that kind of music, I was like, ‘Yeah that’s what I want.’ For me, an interest in female singers started with Anna Van Giersbergen and with Mandylion."

Joseph And the Amazing Technicolour Dreamcoat

"This was life changing because it made me aware that I could sing. It was a musical that we held at our high school, and I was in it. I must have been 12. There were actual auditions and I participated, wanting the role of the narrator which was one of the main roles and one of the characters who sings by far the most. And I got it, even though I shared the position with two other girls.

"All of a sudden, I realised I can sing. I was the teased child, but in that group, I found I could be myself. Only recently, I was reunited with the two teachers that were behind the whole thing. It was fantastic to meet them again and I wondered, if they hadn’t spent so much time investing time in us to make music, who knows if I would have found out that I wanted to sing, that I can sing and that I’m a born performer?

"I was the great mouse as a child. I was the odd one. Why would I want to be onstage? But as soon as I was on it, I belonged there."

"Pantera and Machine Head were the two bands that got me into metal. I must have heard things before that when I was listening to grunge, but it was way too heavy for me - I missed melody. It was just un-dynamic, hard music.

"I miss something vocally in both, but I liked the energy of this kind of metal. They are both melodic and very groovy. I was listening as a teenager so and while I wouldn’t play Machine Head so much now, Pantera has become a timeless thing for me."

"I wanted to do what they were doing. That kept me going, it gave me a purpose. I remember that was 2002 we were going to go on our first European tour and share our bus with part of the crew with Nightwish. Tony and Ewo [Nightwish’s management] were these massive big Finnish guys. Both of them are extremely tall, broad shouldered, low voiced giants and they came in and explained the basic rules of touring together.

"We were like a bunch of school kids listening to them. We were almost afraid, but then they started talking with their low voices and I realised these are super nice guys. It all came down to just, ‘Don’t be a total asshole, let’s drink a little too much and have a good time.’ Which we did!"

"He’s simply my favourite singer in metal. His voice is so diverse, he’s someone who can voice emotion so well. His interpretation of a lyric means you feel the lyric, regardless of its meaning - even if it’s about saving the world and, ‘Here comes the demon…’ and shit I don’t personally get excited about.

"He can make a very proggy band with endless solos sound graspable, understandable by his vocals lines. I mean I like Prog, I just don’t fancy listening to endless solos especially on the keyboards when it just sounds like, ‘I can play a lot of notes really fast!’ Then comes Russell just glues everything together with vocal lines that make complete sense over really complicated parts, with that voice that can colour endlessly.

"I already gave away that I like power voices and… what a woman. I found the total package of her fascinating. There she is [Skunk Anansie singer Skin], with her bald head and her blackness, screaming with anger and god forbid she’s bi-sexual. She rubbed it in like, ‘I don’t give a shit what you think.’ I liked the openness of her, the directness of it and her amazing voice.

"She makes things sound so easy when she sings it and then you go ahead and give it a shot and it’s not. To keep it that powerful and controlled, it’s not easy. Fantastic voice, fantastic songwriter, fantastic performer. Weak As I Am - try and finish that from beginning to end with an untrained voice. It was a challenge."

"I recently saw her in a documentary about high sensitive people. Someone recommended it to me because I am also a high sensitive person. We’re simply wired differently. There’s something else in our brains, so we perceive the world differently. Hence the fact I was teased so much, why I was a different child and why certain environments don’t work for me.

"You’re more sensitive to the emotions of other people, to smell, sounds. In this documentary she’s talking about it as though she is talking to me. Her experiences are very much like mine. The fact that she is a songwriter herself, she’s doing what she wants and has been doing that her entire career made her a role model."

"This album got me singing. Sitting in the car going on family holiday is the most vivid holiday memory I have so that must be pretty early on. My sister and I would be in the back of the car, singing along with it. We knew all the words. If it was life changing I don’t know, but it sowed the seeds for [singing].

"There was a lot of metal that wasn’t fun to sing. I like Pantera but I’m not going to sing along to it. I like Machine Head and Sepultura. Same thing. [Roxette vocalist Marie Fredriksson] died recently but she made a huge impact on me. She was so forward and so sexy, but she wasn’t seen as a sex object. She was seen as a singer, as a strong woman, as a role model."