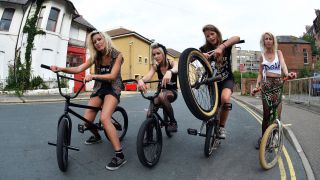 You might expect a beer-swilling punk outfit with a song called Dickhead in their repertoire to have been brought up on a sonic diet of aggressive hardcore, but Maid Of Ace found their own way onto the scene.

“Our mum played the cello when she was younger, and I think our dad started learning the sax at one point, but our parents aren’t into punk,” says lead vocalist and guitarist Alison Elliott, 25. Her bandmates are her sisters Amy, 26, on bass, drummer Abby, 23, and Anna, 22, also a guitarist. For the last ten years, they’ve been playing together as a four-piece, inspired by the likes of The Distillers, Nirvana and X-Ray Spex.

“They were the bands that first got us into this kind of fast, angry music,” explains Alison. “Everything thinks that because we’re all sisters it must have been our parents who introduced us to the music, but that’s not the case.”

Instead, the sisters found themselves ‘jamming’ together, and ten years ago, played their first gig as Maid Of Ace at a school concert in their hometown of Hastings. They’ve been disrupting their local punk scene ever since, and are now breaking out of what they call ‘the dirty South coast’ with a series of impressive festival slots.

This year alone, they’ve toured Europe with Vancouver punks Bishop’s Green, played one of Berlin’s biggest punk festivals, Punk And Disorderly, and appeared at Blackpool’s Rebellion Festival. In November, they’re off on another European tour with Scottish punk legends The Exploited. The most significant show in their career so far, though, is a slot on the BBC Introducing Stage at this year’s Glastonbury. The sisters say they were ‘on a high’ when they got the invitation to play, but if it wasn’t for the encouragement of a friend, it might not have happened.

“Yeah, Glastonbury is definitely the biggest show we’ve played so far,” says Alison, audibly pleased. “It all started when a mate of ours said we should upload some tracks onto this BBC thing [that thing being the BBC Introducing website] and then months later, we got a message from a presenter in Brighton who wanted us to go in and do a live session.”

That presenter was Melita Dennett, a BBC local radio presenter and champion of new music in the south of England, and so impressed was she with Maid Of Ace’s raw, aggressive live sound, that she put them forward for a slot at Glastonbury.

It might sound like they haven’t had time to draw breath this year, but the girls juggle all of their musical commitments with working bar jobs.

“It can get difficult [fitting band duties around bar work] because most of the gigs we play are on weekends,” says Alison. “But none of us stuck it out in college and did brilliantly, so I can’t imagine us doing anything else. Music is all we’ve ever wanted to make a career out of.”

It’s not surprising that, after ten years of slogging it out alone, the band is committed to their DIY ethic.

“At the moment we’re happy with what we’re doing,” says Alison. “But if the right [record deal] came along, maybe…We like having control over everything we do, and we’re not looking for anything at the moment. We’ve been doing this a long time to do with just anyone.”

Doing it themselves certainly hasn’t done them any harm so far. They’re about to start recording their second album – they released their self-titled debut last year – which they hope will be done by next year, and have dreams of ‘conquering Japan’. One place they’ll definitely be going back to is LA; they toured there last November with local punks A Pretty Mess, and after a whirlwind long-distance romance, Alison married the lead singer.

“Yeah, it is difficult having a long distance marriage,” she says. “But it’s been like that since we met, so it’s always been a bit back and forth. It’s expensive!”

Splitting her time between Hastings – where they film a lot of their videos and practice regularly in a space above the pub Abby works in – and LA means Alison’s contributions to the new album will have to be partly done over the Internet, but she isn’t going to let a few thousand miles slow down their progress. Neither is she allowing negative comments about them being an all-female outfit bring them down.

“To be honest, we don’t really experience much [sexism],” she says. “We’ve had the odd person say something like, ‘I wasn’t expecting you to be good’, or ‘I like your music, but I can’t like you because you’re all girls’. I think that’s the stupidest thing I’ve ever heard. But it’s definitely not something we come across very often.”

As well as their international plans, Maid Of Ace still have a strong affection for their hometown.

“Hastings has actually been voted one of the most musical towns in the UK,” Alison laughs. “There aren’t that many venues because a lot have closed, and it’s quite a poor place, but there’s a really good scene here.”

As well as their abrasive, unapologetic sound, Maid Of Ace also have the valuable trait of being genuinely down-to-earth. They joke about how anyone on a night out in Hastings will probably be served a drink by all four of them over the course of the evening, but the mark they’re starting to make on the punk scene means they might not need to be in the pubs much longer.