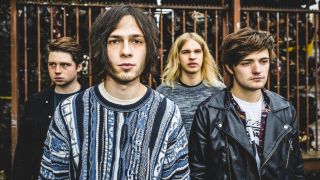 Shropshire is not the most obvious place to discover up-and-coming rock bands, but for the four members of Telford’s Hyena, it’s something they learned early on.

The quartet – singer and guitarist Jacob Ball, bassist Joshua Taylor, guitarist Dom Farley and drummer Reuben Gwilliam – cut their teeth on the likes of Nirvana and Queens Of The Stone Age but soon realised their sleepy town didn’t offer too many opportunities when it came to booking their own gigs.

“Where we’re from, there’s only one little pub and the concept of a band is playing Wonderwall in the background while you have a pint,” says Jacob. “As we were playing since we were so young, we were kind of done with going to play the local pub by the time we were 16. When you’re that age, you don’t really have a concept of a scene – we just wanted to play actual venues.”

“The only bands that came through our town were Wheatus and the singer from T’Pau,” adds Dom. “We just wanted to go and play to more people, because when we played, people would be cup their ears and say it was too loud.”

It seems that a world populated by Wheatus and Carol Decker isn’t enough for some people, so the band would secure gigs in neighbouring Birmingham and eventually book more and more shows across the UK. And, three years on, their sound has echoes of the Seattle trio and the bluster of Josh Homme’s desert behemoths, but there’s nods too, to the unbridled power of Pulled Apart By Horses and the irresistible hooks of Royal Blood. So much so, in fact, that they caught the attention of the Worthing duo’s producer Tom Dalgety, who oversaw their debut single, Mental Home.

“I think when you’re from an area that’s receptive to music, you’re going to get noticed, but when you’re from the middle of fucking nowhere you have to do something that will really grab people’s attention,” offers Jacob. “You have to work twice as hard to get to the point where people will listen, but because we’re not from London or Manchester, people are like, ‘Where the fuck has this come from?’ We think of it as a rite of passage; there’s no band that has ever made it that hasn’t paid their dues.”

Hyena’s hard work is beginning to pay off as they’ve honed a powerful, captivating set that’s capable of getting elbows swinging and jaws hitting the floor. The band will open for Turbowolf on their impending April tour and they’ll make their festival debut at Download in June. And thanks to their near-constant gigging, they’ve learned what to expect in every city they play. Forewarned is forearmed and all that.

“We’ve got this theory,” begins Jacob. “They want it heavier the further you travel north; London and Brighton want eclectic stuff; Birmingham upwards want reasonably heavy but nothing metal; and you’ve got to be fucking slamming it in Scotland! We’ve seen indie bands get booed off.”

Hyena’s debut single Mental Home is out now. For more information, check out their Facebook page.