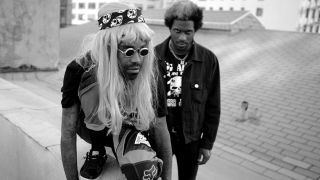 “I have a love/hate relationship with it,” says Ho99o9’s TheOGM of the current music scene. “I love it because there are so many blends of genres – we can do hip hop and mesh it with a different style. But the same time, I hate it because everything is so generic. Everything in the Top 40 sounds the fucking same.”

TheOGM and Yeti999 met each other through mutual friends in the New York underground scene and attended art shows and punk gigs together. The duo, who are fans of 90s hardcore rap, Bad Brains, GBH and Dead Kennedys, merged their influences to create something that’s difficult to categorise and makes for a intense and compelling listen.

“With rap, there’s these hip hoppers who are like, ‘This isn’t hip hop, it has to sound like this’,” explains TheOGM. “There’s also that punk religion where people are slaves to that [ethos] as well… You’ve got to look a certain way, it has to sound a certain way. I’m just like, fuck all these boundaries. We’re not slaves to anything.”

Although they’re still a relatively little known proposition, they’ve been turning heads with their confrontational sound and chaotic live shows. One show with Los Angeles punks Trash Talk was even closed down by the police. Simply put, Ho99o9 are not for the faint of heart.

“Most of our shit is very angry, very violent,” he says. ”It comes from being frustrated. A couple of years back, I wasn’t working for five years straight. We were just grinding, hustling, doing our own shows. There’s a lot of aggression, so it’s very intense. We also love horror flicks, I’m a big fan of Rob Zombie. We want to be able to score movies with our music; we can hear our weirder sounding stuff being played in movies.”

This combination of real life frustration and an obsession with horror cinema has proved to be a winning combination. A quick YouTube search of the band’s music will offer videos full of grisly visuals, or found footage style recordings of live shows. When it comes to the live shows, he says: “don’t expect anything, but expect everything.”

“There’s definitely shock value to what we do, but we’re already like that,” he adds. “Anything that you might see is just an extension of who we really are. But yeah, we definitely like to make people feel uncomfortable.”

Ho99o9 are currently working on their full length debut. Find out more about the duo by visiting their Facebook page.