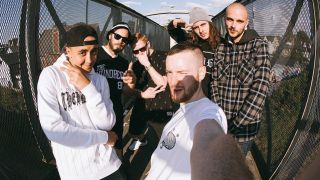 There’s one band in the thriving Cardiff scene who stand out like someone wearing trainers at a wedding. They’re called Astroid Boys and it’s time you got to know them.

“I used to be in a hardcore band when I was a teenager,” says Traxx. “It’s raw, it’s real, it’s DIY; I’ve got those roots. Rappers are like it’s all about them, but I’d rather keep the mentality I had in my punk band.”

“It took me a while to come round to the idea, because I grew up in a school where we were all mad into hip hop,” adds Benji. “We were just troublemakers and didn’t associate with people who listened to rock music. I would never listen to anything with guitars in, I thought my style would change more towards rock and metal. I didn’t want that to happen. I kept doing what I was doing over the music and it worked. It opened a lot of doors for us.”

The Cardiff collective quickly found themselves sharing stages with Brutality Will Prevail, Trash Talk, TRC, Rotting Out and became a regular fixture at Leeds’ Ghostfest. And while they’ve found a home of sorts in the hardcore community, this Welsh act are not without their detractors. It’s not something that particularly bothers them, though, as they’re proudly flying the Baner Cymru through their rap alchemy.

“This is going to sound a bit cocky, but I feel like we’re helping to make Cardiff cool,” says Traxx. “It’s our hometown. We all love it – the accent, the attitude. As we’re progressing as a band, Cardiff is too.”

“I felt so out of place the first time we came to London , but that’s the only thing that’s going to help us be different from the rest,” adds Benji. “It’s all positive vibes with us. When people see you enjoying yourself, they want to enjoy themselves too.”

Their momentum was halted in 2013 when Benji was involved in an incident in Cardiff which resulted in an 18-month spell behind bars. While details are scant, he tells TeamRock that he’s looking to the future with the release of their new EP, CF10 – a nod to their hometown’s postcode.

“I thought I was going to lose everything because I’d fucked up and done something stupid,” says Benji. “My whole life went through the floor, but thankfully, the boys’ work ethic made things even stronger. Obviously, I regret what I did, but going to prison made me and my boys the tightest we’ve ever been. You can’t put a price on friendship and we’ve all pulled through.”

Astroid Boys’ EP CF10 will be released on April 13 and they’re on tour throughout April and May. For more details, see their official Facebook page.