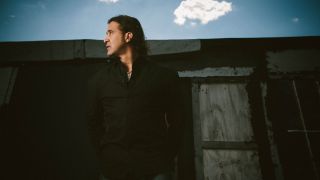 "I was at my friend's house in 1983 and the video for Photograph came on MTV and from that moment I was hooked on rock n' roll."

“That album connected to me in every way: I wanted to be those guys. When I saw the Photograph video I wanted a model wife, and everything that a teenage boy thinks a rock star has. The music moved me, something inside me was different from the moment I heard this record.

“I’d heard Elvis records, and some Donny Hathaway and Otis Redding from my mother, but Pyromania was the record that completely changed the course of my life. The guitars, the rhythms, the energy in the music, the way it was sung… everything spoke to me.

“I’d never heard anything like it and it just made me want to move, I just felt it. When my friend brought the record over to my house we must have listened to Photograph and Foolin’ ten times in a row. But my step-father was extremely religious, and he came into my bedroom when we were listening to it and he said that it was the Devil’s music, so from then on I had to sneak over to my friend Robbie’s house to listen to it in secret.

“I felt a bit guilty about that, but I also kinda felt that my step-father was wrong about this. And I’m glad I listened to my heart, because everything started from there.”

The best Scott Stapp memes on the internet