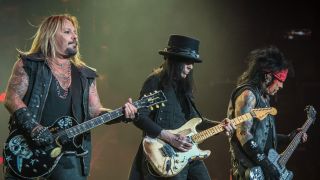 When you’ve had a chequered, but illustrious, 35-year career punctuated with girls, drugs and near-death experiences, you’ll want to go out with a bang. That’s what Mötley Crüe did for their last ever show at Los Angeles’ Staples Centre on December 31, 2015. The setlist was chock full of hits, Tommy Lee hung from the ceiling, and the audience was blasted with enough fire to give Rammstein a run for their money. We’re sure it was very exciting if you were actually there, but watching it back in one of Camden Odeon’s smaller screen rooms doesn’t pack quite the same punch.

The first thing that stands out is the age of the audience. Occupying the seats aren’t dogged rock fans who’ve been there since the Crüe’s first ever show at LA’s Starwood (Tommy Lee raises a titter when he erroneously says their first performance took place in a bar-cum-sandwich shop) but twenty-somethings in Beetlejuice jeans and Mötley Crüe t-shirts. They’ve also brought beer, and lots of it; the couple sat on the same row as this writer get steadily louder as the film goes on, even standing up and bawling along as the band play Looks That Kill.

The opening footage of the production team putting up the gargantuan set is interesting, especially for gig nerds who find it strangely compelling to hang about after the headliners have finished at a festival and watch everything being dismantled. Clearly the audience doesn’t enjoy such pastimes, as they chatter loudly through the preamble before the live footage as if they were watching a DVD in their living room.

The gig begins with Vince Neil feeling up the dancers as he belts out Girls, Girls, Girls, and there’s a feeling that without Mötley Crüe rock is little less sleazy, but maybe that’s a good thing. There are moments that genuinely delight fans: watching Tommy Lee roll around the Staples Center on a hoverboard, Nikki Sixx applying his own makeup and chortling that he likes to be “more feminine” if he’s playing to “rednecks”, and Tommy Lee being suspended upside down as his impressive rollercoaster set piece breaks, but continuing to drum like a man who’s the right way up.

The audience in the film is crying through the Home Sweet Home encore, and while the cinemagoers aren’t moved to tears, they applaud as the credits roll. The rollercoaster moment aside, it feels like Mötley Crüe called it a day at the right time; their overblown on-stage sleaze — and Nikki Sixx’s bizarre and oft-repeated story about wanting his grandfather’s pocket knife so much that when he was finally given his own he carried it in his boot ever since — feel like relics of a rock-and-roll fantasy world that long ago veered from the sublime to the ridiculous. Still, as one man remarks as he leaves the cinema, “we’ve still got Steel Panther.”