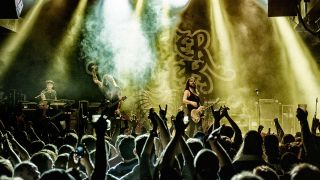 If there's one gig providing value for money this month, it's the triple-pronged attack of Black Stone Cherry, The Cadillac Three and Monster Truck.

Their tour kicks off at the Cardiff Motorpoint Arena this evening, and climaxes with a show at Wembley Arena on December 14.

The European leg of the tour has been in full flow for almost a month, winding its way through Europe in preparation for the final UK leg, so we expect all three bands to be operating as smoothly as well-lubricated hovercraft.

To get an idea of what's going on behind the scenes, Monster Truck guitarist Jeremy Widerman has supplied us with a gallery full of photos: What goes on on tour doesn't stay on tour, but gets shared widely on the internet.

Tickets for the tour (full dates below) are on sale now.