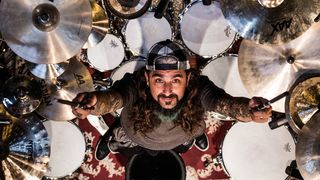 It’s understandable to assume that prog rock would have loomed large in Mike Portnoy’s formative listening years (after all, he was a co-founding member of Dream Theater). But there were quite a few non-prog surprises in the list he assembled for us.

However, he requested a clarification be included before we start - “It’s important to differentiate the ten albums that changed my life vs. my ten favourite albums. Because if you look at my favourite album list, I’ll have Jellyfish’s Spilt Milk or the Beastie Boys’ Paul’s Boutique. Those are favourite albums of mine. But I can’t really say they changed my life. So this is a little bit of a different approach. And these are pretty much in chronological order.”

The first is an album that came out six weeks after I came out - the Beatles’ Sgt. Pepper. I celebrated my 50th birthday last month, and Sgt. Pepper is going to celebrate its 50th birthday this week. It changed my life and I think it changed everybody on earth’s life, because at the time it was the most ground-breaking album ever made.

To this day, it holds up as one of the most ground-breaking albums ever. To have done so much incredible work on just four tracks in the studio is absolutely incredible. It’s one of those albums where they broke every rule in the book, and then wrote a whole new book of rules in the process. The production is just so deep.

The Wall is one of the most cinematic albums. Ever. It’s my favourite Pink Floyd album. It’s one of my favourite albums of all time. And it showed me how deep a record can go - in terms of hitting emotional chords. Not just musical chords, but emotional chords. When you listen to The Wall from start to finish, you’re taken on this emotional journey of ups and downs. It’s like watching an intense film from start to finish. That showed me the way a concept album could be truly cinematic and take you on a journey.

The next couple shaped me as a drummer - the first being the Who’s Live at Leeds. I had already been a huge fan of Tommy, which is still one of my favourite albums of all-time - from a songwriting and musical sense, but not really from a drumming sense. It was Live at Leeds that really showed me Keith Moon’s true colours, and the fact that he really was - to my ears - the focal point of the Who. ]

I’d never heard another drummer play with such character and personality before. It was almost like he was drumming circles around these songs. You see footage of the Who live, you can’t take your eyes off Keith, but if you listen to Live at Leeds, it shows what an amazing live band they were. And personally, I can’t take my ears off of Keith. I can’t help but listen to what he does, and be blown away.

The next drummer from that era who shaped who I am today and changed my life was John Bonham. I’m going to go with The Song Remains the Same, which is a live album. I find that drummers really shine and get to be themselves live on stage. When you listen to The Song Remains the Same, you’re hearing Zeppelin being what made them the great band that they are - how each and every performance was different from night to night.

And the live versions are all extended, they’re improvising and branching out, and trying new things. I love hearing John Bonham guide these jams and improvisations on the album. Sometimes he’s guiding them, and sometimes he’s following Jimmy Page’s lead or John Paul Jones’ lead. But I just love hearing them improvise and jam with each other.

When that came out, I wasn’t familiar with the first three studio albums. Alive! was the album that introduced me to Kiss. I just fell in love with those songs on that album. And there’s so much history with that album. A lot of people say it’s not truly live and was all redone in the studio, but whatever the case, it doesn’t matter - to me, that album captured the true spirit of what Kiss was live on stage.

Whether or not it was on stage or in the studio, it at least brought out that energy. At that point, when I heard that album, I became a Kiss fanatic, and got to see them in 1977 live. That pretty much changed my life and made me who I am today - in terms of wanting to be a touring musician.

I discovered Rush around 1981 or so, when Moving Pictures came out. As much as I love Moving Pictures and Permanent Waves and Hemispheres, to me, Exit…Stage Left was the go-to album, because it had all the best songs from those albums. It had Jacob’s Ladder, Xanadu, YYZ. So to me, Exit…Stage Left was the go-to album to have a crash course in Neil Peart. I remember just learning every one of those songs - inside and out - and pretty much redefining my drumming at that stage of my life.

Before I discovered Neil and Rush, it was all the bands I just named. Which is a little more straight-ahead, 4/4 drumming. But then I discovered Rush, and Neil turned my world upside down - in terms of what you can do with a drum kit. As well as progressive type writing - in terms of longer songs and odd time signatures. That was the album that really shaped my style of what was to come in my career.

It’s so hard to pick just one Zappa album, because they were all so different. He went through so many different phases, and I love Joe’s Garage with Vinnie Colaiuta on drums, and I love Apostrophe (‘) and Over-Nite Sensation. But if I had to pinpoint one, it would have to be Sheik Yerbouti, because that was the first Zappa album I heard.

I was drawn to Frank because of the humour. I remember being an eleven-year-old kid, and being able to listen to songs like Jewish Princess or Broken Hearts Are for Assholes, all these songs that I felt like I was listening to a “dirty album”! I was able to learn about sex, drugs, and rock’n’roll through these satirical lyrics of Frank Zappa.

At first I was drawn to that album because of the humour, but when I became a more serious musician, I started realising what the hell was going on behind the lyrics. And that album was the first time I heard Terry Bozzio playing drums. I grew to appreciate that album on a musical level - as well as the rest of the Zappa catalog, which shaped who I am. To this day, Frank is still one of my biggest heroes of all-time.

A lot of people pinpoint Master of Puppets as the quintessential Metallica album. And I still might, as well. But I think it was Kill ‘Em All that really changed my life and really had an effect on me. I remember the first time I heard Kill ‘Em All, I had never heard anything that raw and heavy and fast in my life. I had already been listening to Motörhead and stuff like that, but this was the power and volume of Motörhead, but was really tight.

The chunky rhythms and production was so raw and tight. I had never heard anything like this. It was the first taste of thrash. And then sure enough, in its wake, I discovered Exodus’ Bonded by Blood, Anthrax’s Fistful of Metal, Megadeth, Testament, and bands like that. But really Kill ‘Em All was the one that changed the course of metal. And to this day, I still think it’s the one that had the biggest impact on me.

This was released in 1997, which was 30 years after Sgt. Pepper, but as far as I’m concerned, OK Computer is the Sgt. Pepper for the new millennium. And the same way that Sgt. Pepper re-wrote all the rules and was the blueprint for experimentation in ’67, I think OK Computer did that in ’97 - for a whole new generation.

And the album has so much depth in terms of production and sonic value, but it’s not like the later-day Radiohead albums, where it’s just experimentation for experimentation’s sake. It also has amazing songs - everything from Exit Music (For a Film) to Paranoid Android to Karma Police …I mean, those are amazing, well-written songs. So you had a combination of great songs and absolutely groundbreaking production - it’s a combination that makes for one of the greatest albums of all-time.

It’s now been 25 years, and since then, I’ve made maybe 50 albums, but it was the success of Images and Words that allowed me to do that. We made that album at a point in Dream Theater’s career where we almost threw in the towel. We made that record after sitting around for almost two years, in the wake of the failure of our debut album [1989’s When Dream and Day Unite]. And at that point, we changed singers, record companies, we spent two years writing this material with nothing going for us - no audience, no fanbase, no management, no singer, no record label.

We came close to breaking up, but we stuck with it, got a singer, got a new label, made this album, and even once it came out, it kind of sat on the shelf for a few months, before anybody even noticed it. But then once Pull Me Under broke around October of ’92, it changed everything. It changed the course of the band and my life. Forever. It gave us an audience that has been with us ever since.