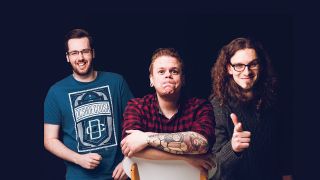 When the Chelyabinsk meteor burst into the earth’s atmosphere in February 2013, no one had seen it coming. Even for the most astute astronomers, those whose duty it is to identify and track potential meteors as they drift through space, it came as a surprise when the burning ball of fire and rock glided across the morning skyline.

However, through combining video footage taken from the dashcams of cars with the parallax method – which measures distances through triangulation – scientists were able to pinpoint the exact path it took through the cosmos. It led them on an incredible path of discovery about a phenomenon which, while it may have inspired many great works of science fiction, still poses a terrifyingly real threat to humanity. The parallax method and what we learnt from Chelyabinsk could prove vital in our defence against more deadly meteors in future. Its details may be complex, but it’s ultimately fascinating. As such, this band couldn’t have a better name.

The Parallax Method started out as an instrumental side project, but things have since blossomed for the three-piece. Their music has been described as Karnivool jamming with TesseracT and they wear their influences proudly. Across their songs you’ll hear dark, cascading chord progressions not unlike those of Opeth and the avant-garde playing of Steve Vai, all underpinned by a rhythm section pulsating with a dazzling chemistry. Their grooves are devastatingly contagious and so when they meander down dark, obscure avenues, you willingly follow. Very much a modern band, they are representative of a society that has access to anything and everything all at once, and they blur borders for fun.

Having met in 2010 through playing in other bands, their shared music tastes – “We like pretty much everything” enthuses guitarist Danny Beardsley – prompted them to unshackle themselves from conventions and rules. They became musical yes men: no matter how absurd a suggestion or idea may be, they will try it.

“Our main focus with this band is to experiment musically,” Beardsley says. “To experiment with time signatures, melody and harmony. Ego is left at the door – there’s no room for that. What I love about this band is that you never know where you’re going to end up. We never say no to each other; we always try ideas out. It’s about challenging ourselves and having fun with the music.

“We all have certain genres that are close to our hearts. Dave [Wright, drums] is really into the djenty stuff and his favourite band is In Flames, so he pushes for the big, heavy riffs. Our bassist [Ben Edis] loves the funkier sort of stuff like Primus and Red Hot Chili Peppers so he brings that to the table, whereas I love Guthrie Govan and Big Wreck. We play up to that when we’re jamming and, as clichéd as it sounds, that’s where the magic happens.”

Sometimes, accidents can have magical consequences, helping sculpt something fresh. “The mistakes make some of the best ideas because you’re not running on autopilot,” says Beardsley. “Your ear is used to going a certain way so a mistake can often open up a new path that you wouldn’t have gone down otherwise.”

The results of their experiments are two conceptual EPs, The Owl and The Squid. Gravitating around an eternal war between the owl (wise and collected, the manifestation of their structured, intelligent musical approach) and the squid (which represents both their brawn and slippery twists and turns), both releases flow beautifully from one to another. So much so, The Squid begins with track six.

“I’ve carefully structured the samples between songs and there are subtle references to what’s come before,” reveals Beardsley. “We’ve taken the standout riffs on The Owl and developed them further.”

He does admit, though, that the concept is loose: “We don’t want people to think we’re a pretentious band because we’re really not. We’re just three best mates playing music together and seeing how far we can take it. And apart from creating as many ridiculous puns as possible, that’s the bottom line. We’re not trying to be cool; we’re not cool at all.”

The track names alone are deserving of accolades, be it a Prog Award or the Booker Prize. From Let’s Get Kraken and Owlgarhythm to You’ve Gotta Be Squiddin’ Me, they reveal the fun side of the band. For all their serious technical wizardry, which jitters like Guthrie Govan having a seizure, flitters like Les Claypool trying to out-weird Frank Zappa and scintillates with searing lead lines akin to Paul Gilbert and Eric Johnson, this is simply a fun escape for them.

“You’ve gotta be honest, music is from the heart. Whether you’re playing something brutally heavy or a soft ballad, it’s all from the heart. It should be personal, you shouldn’t write to rules. It’s hard to describe the feeling that resonates within you when you stumble upon a great guitar riff or idea. But you rely on that feeling when writing.”

For a moment, Beardsley stops talking. There is, in that moment, something buzzing in the silence. He smiles and the passion he exudes when he says this is evident: “Music is wonderful. I love it.”

And that’s the thing. All that matters, in the end, is that an honest passion drives this band to make the noises they do. It’s the expressionism that reverberates from their souls and into their instruments. It’s immersive.

“Everyone has the same notes to play with; it’s about how you string them together,” he concludes. “You may look at someone and find certain aspects of the way they live their life that you can learn from, but you don’t want to be them. For me, it’s the same with guitar. I look at so many guitarists that I find inspiring, but the goal is to sound like me. It’s not just about writing music but finding a bit about yourself as a person as well.”

The Owl EP is out now and The Squid EP is out on May 12. See www.theparallaxmethod.com for more information.