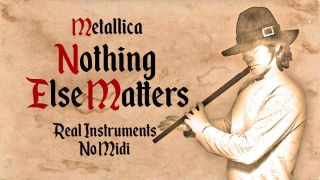 Oh, Internet, you’ve outdone yourself. Just when you thought you’d heard cover versions of metal classics played in every conceivable style, from Pantera’s Cowboys From Hell played on the hurdy gurdy to Donald Trump intoning Slayer’s Reign In Blood, along comes something that raises the bar on genius.

You Tuber Algal the Bard has taken Metallica’s 1991 hit Nothing Else Matters and reinvented it as a medieval ballad played on lute, flute, tambourine and some other instruments that were all the rage 500 years ago.

The insane thing is, it works brilliantly. You can totally imagine Henry VIII munching down on a haunch of venison while his merrie minstrels rock out 15th century style (note to anyone under the age of 30: Henry VIII was a British king from the olden days. No? Look, just imagine it’s Game Of Thrones).

Algal has form on this front. He’s given the britches’n’hose treatement to System Of A Down’s mighty Toxicity, as well as a bunch of video game theme tunes.

So sharpen your broadsword, fire up the steed and enjoy Nothing Else Matters as it we're pretty sure Lars Ulrich and James Hetfield wanted it to be heard.