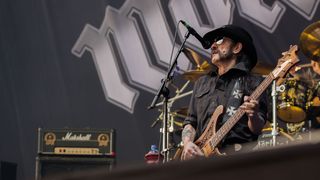 The name is synonymous with rock’n’roll. Launched by Jim ‘The Father of Loud’ Marshall in 1962 to supply London’s burgeoning music scene with an amplifier that served the needs of guitarists like Pete Townsend, Ritchie Blackmore and ‘Big’ Jim Sullivan, the company has since gone on the provide a foundation for many of rock’s most famous musicians.

Half a century since its launch, Marshall is one of the most iconic brands in music, and a pair of Dutch filmmakers are making Father Of Loud, a documentary that celebrates its history and explain its appeal. So far they’ve filmed interviews with Lemmy, Slash, Zakk Wylde, Lzzy Hale, Kerry King, Billy F. Gibbons, Adrian Vandenberg, Joe Bonamassa, Joel O’Keeffe, Joe Satriani and Joanne Shaw Taylor, and now they’ve launched a Kickstarter campaign to get the project finished.

We spoke to producer/director Peter Visscher about the film.

Why make a film about Marshall?

We’ve always been avid fans of rock’n’roll music, and one thing all of our music heroes seem to have in common is that they play through Marshall amplifiers. This sparked our interest; how did a small family music store grow into a household name for musicians all over the world? That had to be a good story for a documentary!

This machine changed the music industry, serving generations with its beautiful and crunchy sound. The Marshall amplifier is one of the most iconic objects in rock’n’roll. Everybody knows the black cabinet with the handwritten logo.

The BBC did a Marshall documentary a few years back. How will yours be different?

We learned about the BBC documentary when we were in the middle of the production phase of our film. We contacted the creators, and after a great conversation we discovered that our films are very different. The BBC documentary discusses the history of Jim Marshall and the first years of Marshall amps. Our film is more about the distinctive sound of the Marshall amps, and is seen from the guitar player’s perspective.

What’s been the hardest part about making the film?

The hardest part so far has been the planning. It was quite a challenge to sync up our calendars with all the bands’ tour schedules. But somehow we managed to talk to 12 great guitar players, and we’re really grateful for that. Now we have hours of footage. So the hardest part might become the editing of the film.

Tell us about talking to Lemmy

For us it was truly special as he is one of our musical heroes. We interviewed Lemmy at the Graspop festival in Belgium. He looked old, but he was in a good mood and we had a really nice chat. He had a lot of knowledge about Marshall and his motto was simple: it has to work and it has to be fucking loud. That’s why he kept the same Marshalls for such a long time. Lemmy’s modified Marshalls have become some of the the most recognised amps in the world. And the Marshall company used his famous Murder One set-up to create Lemmy’s signature bass amp.

A couple of months later in Düsseldorf, Germany we filmed Motörhead’s concert. It turns out it was one of the last shows Motörhead played. Motörhead’s promotor was really helpful and we were aloud to film their entire show. At the end of the show Lemmy, as always, said, “Don’t forget us. We are Motörhead and we play rock’n’roll.” Somehow it brought tears to my eyes, as if this was the last time I would see Lemmy and Motörhead.

Who’s been the best interviewee you’ve talked to and why?

Me and Lenn [fellow producer/director Lennart Rejinders] prepare the interviews together. But we always play ‘rock paper scissors’ to decide who conducts the interview.

My favourite interview was with Joe Bonamassa. He’s one of the most knowledgeable guitarists in the industry. He’s a living encyclopaedia and calls himself a full-time guitar nerd, so I had to prepare the interview thoroughly. We sat down for almost 45 minutes and had a very interesting and technical conversation.

For Lenn it was undoubtedly Slash, as he grew up with Appetite for Destruction on repeat. Slash was actually the first artist who agreed to participate in our documentary, and to hear the his amp-related stories about Appetite was amazing.

What have you learned making the film?

This film taught us a lot about the nitty gritty of filmmaking. But we’ve also learned that all of the artists are really passionate about their gear as it plays such a large part in the sound they want to create. It is their tool, their voice.

Who else do you want to talk to?

Although we are really happy with our list of featured artists, there are still some guitar legends we would love to add to the film, mostly to hear their experiences in the 60s and 70s. Our dream list would be Pete Townshend, Jimmy Page, Eric Clapton and Angus Young. We also would like to talk to some influential technician and producers like Eddie Kramer, known for his work with Jimi Hendrix and Led Zeppelin.

Maybe they’ll answer my email requests after this interview…

What are you hoping for from the Kickstarter campaign?

We’re hoping that people want to see this film as we need them to finish it! Archive footage, music rights and distribution are all expensive. So if we reach our goal we can make this into an amazing film!

Contribute to the Father Of Loud Kickstarter campaign.