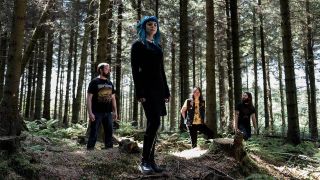 Wrexham doom warlords Mammoth Weed Wizard Bastard are premiering the title track from their next album Y Proffwyd Dwyll, which translates as The False Prophet.

Speaking to Hammer about the song, guitarist Paul Michael Davies says, “This is an old story of a group of people being led into a barren wasteland by a false prophet who they thought would save them from a disease they were all dying from.

“The track features Jess playing cello in the breakdown; strings can be very powerful and dark. Prokoviev, Berlioz and Beethoven used strings to this end and we wanted some of that drama before the drums and all the guitars kick in. It gives it a really evil power.”

Y Proffwyd Dwyll is out September 30, via New Heavy Sounds.