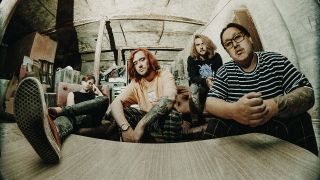 Their sonic bludgeoning of death metal sensibilities jammed into an aggressive hardcore framework will leave you feeling numb, quivering on the floor.

Speaking previously to Metal Hammer, guitarist Kyle Holt said God Complex "set out to make some of the heaviest music that the UK has to offer" and with this new EP it's safe to say they're damn close.

Check it out below, plus a track-by-track guide to the record from the band.

"The intro track of the EP is also an introduction to the overarching motif of the record. This and the outro track form a full sentence, spoken by author Christopher Hitchens in his critique of the doctrine of original sin: ‘We are all created sick and ordered to be well.’ This idea of being thrust into a society that has expectations of you that are near to impossible. The whole EP deals with hatred on a number of levels and this sets up the tone in a very abrupt way."

"This was probably the first song we ever wrote as a band, it was influenced by a news article on a chemical weapons attack on a Syrian town back in 2017. As the track grew, the subject matter grew to focus on man’s capability for evil and hatred towards one another, and how that shapes the world today. The way that people will often turn a blind eye to serious atrocities like this just because it’s not on their doorstep disgusts. We aim for people to listen to our music and to stop passively accepting the horrors of the world because it’s more convenient."

"Stone Hand is about how we as a species are damaging the Earth, and more specifically about oil and how natural resources are being depleted. We’re hurtling towards a future without it, despite building a society dependent on what it provides. The track refers to a belief that as a race this quest for destruction will take us right back to the Stone Age once everything inevitably dries up."

"The lowest earners of society have little choice than to live in rented, cheap houses. And out of this desperation landlords and letting agencies thrive, taking advantage of people and fleecing them out of their money. This song hits close to home as a member of the band was lied to about their tenancy agreement and was left homeless for a short period.

"The government does very little to help people in those situations, as the current Tory occupation prefers to support the heartless companies over the struggling citizens. The song was named Slumlord after the tyrants that run third-world slums/favelas, profiting in any way they can from the people."

Ordered To Be Well

"This song carries on the theme touched upon in Created Sick, as previously mentioned. The phrase ‘Created sick and ordered to be well’ refers to original sin, the belief that we are all born sinful and need to atone through our lives. As people we believe this is a toxic doctrine and highlights the misuse of religion. It also tackles the issue of chemical warfare and again highlights man’s destructive nature through these different avenues, like using religious doctrine as reasoning for declaring an act of war."

Created Sick is released October 5 via Venn Records, and is available to order now.