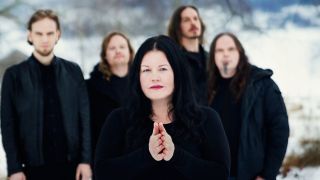 One of the most bewildering and beguiling bands to have emerged from the Norwegian metal scene, Madder Mortem have been roaming its more picturesque byways since 1997, building up the kind of small yet obsessive fanbase that’s a mark of artist able to create their own, fully immersive world.

If the band’s name are new to you, that might be because it’s been seven years since their last album, Eight Ways, was released. The band have clearly been gathering their forces, however, because their imminent comeback, Red In Tooth And Claw – due out via Karisma Records on October 28 – is, as the title suggests, their most vivid and gripping opus yet.

Progressive as they may be, Madder Mortem’s shifting, expansive dynamics have always orbited a powerful emotional core, driven by the fearless, unforgettable vocals of Agnete M Kirkevaag, by turns velveteen, fevered and frightening as they navigate turbulent yet vivid landscapes as if recalling a dream from which you’ve just woken up.

We are proud to offer an exclusive preview in the scintillating form of the opening track, Blood On The Sand. A song that kicks into full gear from the off, it’s heavyweight riffs are the engine for a thrillingly restless yet strangely elegant journey as the band shovel all manner of invention into its furnace and elevate themselves several leagues about the metal hoi polloi in the process.

Throw open the windows, throw out your compasses and lose yourself to the wild wonder that is Blood On The Sand below!

And pre-order Red In Tooth And Claw via webshop, Bandcamp, or from the US.