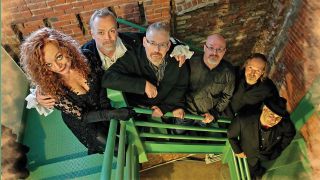 “My first introduction to real prog was in 2004, when a friend handed me the Yes Symphonic Live DVD,” says Circuline keyboard player and vocalist Andrew Colyer.

“I watched that DVD and I thought my head was going to explode – this is how it’s supposed to be. I knew in that moment that prog was going to be my life path; it has the grandeur of classical music, the power of rock, and the harmonic and rhythmic sophistication of jazz.”

Classically trained at the prestigious Juilliard School in New York, Colyer is the mastermind behind Circuline, a group whose origins lie in Downing Grey, a tribute act devoted not to any single band, but to the titans of progressive rock. “We covered nine bands in one night: Emerson Lake & Palmer, Genesis, Gentle Giant, Jethro Tull, King Crimson, Pink Floyd, Rush, UK, and Yes,” he says.

I knew in that moment that prog was going to be my life path.

“In Circuline, our style has definitely been informed by those bands, but we as a group also love jazz fusion, classical, modern rock, and movie soundtracks.”

The original core of Colyer, guitarist Bill Shannon (who has now left) and drummer Darin Brannon were joined by vocalist Billy Spillane from Led Zeppelin tribute No Quarter, and Natalie Brown.

“Natalie and I met in January 2013, when she was looking for a keyboard player,” says Colyer. “Billy came over to Natalie’s house one night and we found out we could sing harmonies like Crosby, Stills & Nash. I suggested to the Downing Grey guys that we have Natalie join as a back-up singer to do the Pink Floyd ‘riffing’ vocal parts on Brain Damage. When we formed Circuline, Billy agreed to join the band as long as Natalie agreed to be co-lead vocalist. After she happily agreed, we had our band.”

Their debut album, Return, was recorded in three different studios dotted around New York State, with guest contributions from Sound Of Contact’s Matt Dorsey on bass, vocalist Randy McStine from Lo-Fi Resistance, and a violin solo by Joe Deninzon of Stratospheerius.

Making the album required climbing a steep learning curve, explains Colyer. “As a new band, the members of which had disparate personalities, we had to learn how to work together to write and record an album. We probably disagreed the most during the mixing process, because everyone wants to hear his part the loudest.”

Work is well under way for the follow-up – working title Counterpoint – which is scheduled for release next March.

Asked what they learned making their debut that they are bringing to their second record, Colyer replies, “How to properly mic and record guitars and drums. Also, our process is greatly streamlined and much faster. We’re much better at capturing our ideas, keeping them organised, and hopefully putting things together.

“We are continuing to evolve as writers, but it’s hard to be objective during the process. All I can tell you is that we are really excited every day that we leave the studio. More than that, you’ll all have to be the judge.”