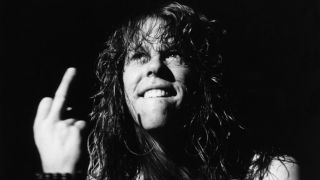 Few venues played such an important part in the rise of metal in America as L’Amour. The Brooklyn club was the cradle of thrash on the East Coast during the 1980s, providing a jumping-off point for such homegrown acts as Anthrax, out-of-town superstars-in-waiting Metallica, Slayer and even Guns N’ Roses and influential overseas acts such as Saxon and Raven. It hosted secret shows by the likes of Iron Maiden, and span some of the most influential records ever made before they’d even hit the shelves.

The man behind the its success was Alex Kayne. As the club’s DJ, Kayne was on a crusade to bring metal to the masses, giving a nightly earful of thunderous noise to hungry crowds tired of the synthetic pop of the day.

“You could see all sorts of ridiculousness – and by that I mean talented bands, for very little money, and you saw them on the way up,” says Kayne today. “Like Slayer – L’Amour was their first time on the East Coast, so they didn’t know that they even had fans out here. They were really stoked to see that this club was into them. The place was a mosh pit the whole night.”

First bitten by the DJing bug in the mid-70s, Kayne started out spinning disco records to polyster-suited New Yorkers who looked like they’d just stepped out of Saturday Night Fever. But he soon discovered he had other options. One of these was a former warehouse located on a grim, industrial stretch of 63rd street in the Brooklyn neighbourhood on Bensonhurst.

“L’Amour was a discotheque when it first opened in 1978,” he recalls. My friend, Mike Pace, was a DJ there. Around 1980-81, the club started swaying towards rock music, and Mike began borrowing all my rock records. When he left, I was the logical choice to be DJ, as I had amassaed a huge collection of rock records. The club’s owners were very cooperative – they gave me free reign.”

Kayne was a true aficiando, and it was his collection – which included records by then-unknown British bands like Diamond Head and Angel Witch alongside demos by local groups such as Anthrax and Overkill – that would be the foundation on which L’Amour’s future would be built on. It wasn’t long before the last traces of disco were banished and the club became an all-metal venue.

“I played Metallica’s demo cassette, Carnivore’s demo cassette,” Kayne remembers. “For a lot of people in the crowd, it was the first time anywhere in the world they’d heard these bands. It was my plan, early on, to spotlight bands like Saxon, Motorhead, Accept, Witchfynder General, and Sledgehammer. That’s why, in the beginning, my playlist was mostly European bands. I thought they were light years ahead of their US counterparts.”

If this new musical direction wasn’t enough to banish the last disco hold-outs, then the club’s 50,000 watt sound system did the job. “We sent them out into the streets to seek entertainment elsewhere,” says Kayne gleefully. “That was our goal.”

It didn’t take long for the US underground metal industry to cotton on to what was happening on. Kayne soon found himself innudated with promotional records from the likes of Metal Blade boss Brian Slagel, Jon Zazula of Megaforce and Don Girovasi from Combat.

“When I played a track at L’Amour, the crowd went out and bought those records,” says Kayne. “At the time, we were doing north of 3100 people a week coming to the club. Even if a small percentage of those people bought the records, it was a sales uptick. I’d always get great material back then from labels like Music For Nations, Ebony, Neat, Roadrunner, and other independents. There were no conglomerates steering the ship. Those were the best years of the club – when things were still underground.”

Kayne played a big part in breaking American and European metal bands. In a far cry from today’s ultra-paranoid music industry, he premiered Queensryche’s self-titled debut EP, Accept’s Fast As A Shark and Judas Priest’s Screaming For Vengeance long before they were released.

L’Amour was a part of the bigger US grassroots metal scene. Another was the Old Bridge Militia, a devout group of New Jersey headbangers-come-support system for metal bands throughout the 80s. The Militia famously helped Metallica survive when they decamped from San Francisco in early 1983, providing the future thrash giants with food and a place to live, even selling tickets to their shows.

“They were great friends of mine,” Kayne says of the Militia. “They were doing their thing promoting the music, DJ’ing at Club 516 in New Jersey. Often they could make or break a show. If they liked a band, they’d bring 100 people with them. If they didn’t like a band, they didn’t get any support at all. They were instrumental in having Johnny Z’s bands showcase for the label at L’Amour. All of his bands played there. It was a very cool support system to have.”

While Kayne himself did some of the booking for the club, he says he was never really into the business aspect – contracts, riders and the rest of it. His focus was to get the crowd amped to the records he played. To help this along, he would sync the tunes to a giant video screen in the club.

“I was one of the first VJ’s in New York to mix horror movie scenes with heavy metal music,” Kayne proudly states of the mid-1980’s period. “This actually became a trend later on. Other clubs saw what we were doing at L’Amour and started copying us. When we started, there were no other metal clubs within a 500 mile radius.”

Pretty much anyone who was anyone played L’Amours during its glory days. Anthrax guitarist Scott Ian recalls seeing Metallica opening for New York heroes The Rods and Dutch hard rockers Vandenberg, the latter featuring future Whitesnake guitarist Adrian Vandenberg. The latter band found themselves on the business end of an alcohol-fuelled rant from then-Metallica guitarist Dave Mustaine.

“Vandenberg is sound checking at 4pm and Dave is ripped,” says Ian. “He’s screaming at Adrian Vandenberg, ‘Get the fuck off the stage, you suck.’ The other dudes in the band are trying to run and hide. Metallica didn’t even have a record out yet.”

By the late 80s, the club’s reputation was such that bigger bands stopped off to play here. In 1998, Iron Maiden played a secret gig at the club during the US leg of the Seventh Tour Of A Seventh Tour under the name Charlotte And The Harlots.

“Bruce Dickinson comes up to the booth and asks to make a request,” as the story begins. “I say, ‘Sure, what do you want to hear? He asks for something off of Maiden Japan, as I start to shuffle through my records. I find it and show it to him. He looks at it and laughs, ‘No, not that one – Deep Purple Made in Japan!’ Both Bruce and Steve Harris commented on the great music I was playing.”

For Kayne, part of L’Amour’s success came from the sense of community it engendered. It brought everyone together under one flag, like metal in general.

“Whenever I played a Slayer track I saw flying bodies everywhere,” he says. “It gave them a sense of power and togetherness not found anywhere else.”

Even after the glory days of thrash passed, New York’s metal scene thrived and L’Amour weathered grunge, pop-punk and the other passing trends. But the club met an unceremonious end in 2004, when owners Mike and George Parante announced the club would close for renovations – only to shut the doors permanently and cancel all future shows. Over the past decade, the hulking building that once housed this most influential of American venues has hosted countless fly-by-night dance clubs, none of which has had the fanbase or staying power that L’Amour once enjoyed.

Alex Kayne continues to DJ to this day in the New York/New Jersey area, often opening shows for bands who once played L’Amour, like King’s X, Overkill, and Michael Schenker. He’s written a book on his time at the club, L’Amour: Rock Capital of Brooklyn, and still preaching the metal gospel to anyone that will listen, most of the time wearing a “L’Amour Rocks” t-shirt.

“This music was all spread by word of mouth,” he says. “My job was complete at L’Amour if I could say I was kicking the crowd’s ass, bleeding their ears, making them happy, and introducing them to some of the best metal they’ve ever heard in their lives.”