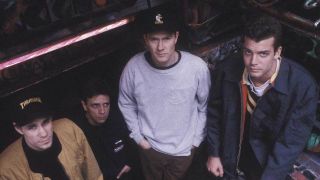 New York was home to a thriving, snarling, evolving metal scene in the 1990s. These are the five essential albums you need to recreate that feeling at the touch of a button.

With one of the most infamous album covers of all time – a photo of a man decapitated by a train – the young “extreme gorehounds” in Unsane spat out one of the most brutal, punishing debuts ever. It’s a gut-punch of searing noise-rock.

Post-hardcore, post-noise rock, post-everything, really, Helmet’s signature staccato riffs and nods to jazz and groove-metal cemented them as one of the most eccentric and influential metal bands of the era.

Led by the strapping dark lord Peter Steele, Type O rose from the ashes of chest-thumping thrashers Carnivore and went on to create some of the most emotionally tortured goth-metal of the decade. Bloody Kisses is their magnum opus.

Like their Brooklyn buds Type O, LOA languished in abject misery, but on their hard-charging debut they tempered their free-flowing bummer jams with enough crossover thrash and belching sludge to remind you that they were from one of the most dangerous cities in America.

The rise and fall of New York's 90s metal scene