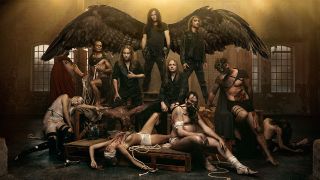 Kreator are one of the best bands to ever come from Germany as well as being honorary members of thrash’s Big Four, and for good reason. Throughout their 35 year career, the Teutonic titans have remained unchanged in their dedication to playing as hard and fast as possible, with latest album Gods Of Violence standing up their with their best material.

In Metal Hammer 300, we sat down with thrash luminaries Dave Mustaine and Scott Ian to discuss how to survive as a metal band and talk about the state of heavy music today. But what does Kreator’s Mille think about it all? Well, we caught up with the man himself to find out.

Will we ever see metal bands get big enough to headline the world’s biggest festivals?

“Absolutely, I can feel it coming. Eventually these older bands aren’t going to be around and there are lots of cool, younger bands coming through that will be able to headline festivals in the future. You know though, when you’re a headliner you have to invest, you can’t just stand there and play music. Being a headline band doesn’t really put a lot of pressure on a band’s shoulders, but they’re the ones who need to entertain the people the most. You see the production that we come to festivals with is huge nowadays, and that’s what it comes down to: you need a big show to come along with the music.”

Is it important to keep showmanship alive or does metal not need to worry about it? Do we need to support the bands who ramp up the theatricality element or big stage productions?

“I was talking about this with Papa [Emeritus] from Ghost. Those types of bands will also be able to headline because they bring that theatricality and stage show. For me that’s a big part of metal. Obviously the big name is Iron Maiden, they’ve been doing this for many years and that’s the way to go. But if everything is focused on the show, you forget the music, so you’ve got to find the right balance. The key is to be yourself.”

Metal is about acceptance

Does metal need the mainstream?

“We don’t need the mainstream as there’s no such thing any more. The old dinosaur bands were out of this world back in the day and they’ll also be there in people’s minds, but bands nowadays just need a bit of recognition. The metal community is really supportive: once they discover a band they’ll come to the shows, but maybe not in the way they used to by supporting the record companies and industry. It’s a different world nowadays. We get offers to play on TV all the time. We just played a German TV show with Papa from Ghost and Max Gruber from Drangsal because the host likes metal, but we did it because we wanted to, not because we needed to.”

Do we need to dump the stereotype of what rock and metal fans should look like?

“Maybe. Metal bands and fans come from so many different places and dress in lots of different ways. The whole old-school look – where it’s very important on how you look – can also be posing, you know? You just have to be true to yourself and look whatever way you want, but ultimately the music is what comes first.”

Does metal have a problem with living in the past when it comes to the whole ‘you must wear denim and leather’?

“Metal has no rules. Even in the 1980s there were no rules that you had to have long hair or short hair or dress a certain way. I see people post negative comments about the fact that we’re not ‘true’ enough any more or we play or work with certain people, but we do whatever we want. I got into metal because there were no rules, nobody can tell me what to do, not even my fans.”

There’s no such thing as mainstream any more

Is metal doing enough to diversify its audience and make others feel more included?

“Absolutely, metal is about acceptance. It’s about being yourself, and being who you want. Anyone can join, and the metal community is very diverse. There are people that are old, people who are young, whatever colour or sexual orientation, everybody is welcome. Metal certainly needs to point out if there are negativities, like homophobia for example, as we’re all about unity.”

Where are all the scenes?

“We’ve played all over the world, and wherever we go you’d be surprised how many local bands there are. There are always lots of bands, but they’re not being recognised because they’re so far away and record companies make no effort to explore. There’s a whole world of young, exciting bands out there, you just have to look for them a little bit. Regardless of where, it could be Africa or New Zealand; they can spread the word online wherever they are. There’s a new band Zeal & Ardor, who just put the music on Soundcloud and then released the album – it doesn’t matter how you get the music out there as long as it’s out there. It would be even cooler if the next big bands came from there. A lot of old school people complain that the internet has destroyed the scene, but I’m the opposite.”

In Metal Hammer 300, we gathered the biggest and best names in metal to debate the genre we love. Is metal in danger of stagnating? Do we take ourselves too seriously? What is metal anyway? Find out in Metal Hammer issue 300 – in stores and available to buy online now.

You can also read all of the issue 300 on TeamRock+ right this second.