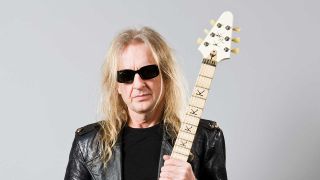 "The concert will also bring about the opportunity to play again with some very dear and talented metal legends from the past," says Downing. "The combination of these Icons will for sure enable us to deliver up one of the most exciting concerts this year, so much so that it would not be out of place to call this the ultimate ass-kicking 'MegaPriest' fest, and is one that is not to be missed."

The show will take place at the venue that bears his name, K.K.'s Steel Mill in Wolverhampton, with former Iron Maiden singer Blaze Bayley supporting. Tickets are just £10.

"We started when I was 17, and I never had a car until I was 27. I was still catching the bus everywhere. So it was rough going. And I think Victim Of Changes really helped us. It was one of the very first songs I wrote, all those years ago, with Al Atkins.

"It was called something different originally, but It was it was a song that stayed with us throughout our careers, and always stayed in the setlist."

Take On The World

"Take On The World is a really important song. I say that because it could have all gone wrong, but it didn't because that song helped us to become a household name. A lot of people don't know that, and that's the reason I'm selecting the song. We were still struggling as a band, and we didn't really have too much going for us.

"But it became a hit single. And that's why it's pretty important. That single sold around 360,000 copies, which is amazing. It put it in the charts, and it put us on Top Of The Pops."

"Wolverhampton Wanders took the song on as their anthem, which was great. The song got us noticed in the industry, and led to British Steel, which consolidated Priest as the archetypal heavy metal band."

"With British Steel we had a very complete album for the first time. We had a great cover – with the award-winning razor blade – and it was the first album where we went out all clad in leather and studs, and I think that really helped us to keep on the good side of our fans. We hardened up, and a lot of other bands followed suit.

"Breaking The Law was probably one of the first ever concept videos, which is thanks to the director Julian Temple. He did us a massive favour by picking the song and doing the video.

"We did the tour with Iron Maiden supporting, then we took it to America, which was great, and I think Breaking The Law was instrumental in all of that."

You've Got Another Thing Comin'

"The next big thing to come along was You've Got Another Thing Comin'. That was a big one. It was on the Screaming For Vengeance album, and people just took it on board straight away, especially in America. It was all over the radio."

"A lot of people are going to disagree with this, but Turbo Lover was big thing in our lives. We went out in a lot of countries in the world, the song was played all over the radio, and the album [Turbo] was very successful.

"This was an important album. Even now, when I listen to that album, I'm thinking, 'How the hell did we put that album together?' Because from front to back it has this great continuity.

"It was probably a massive turning point in metal when Priest did that album, because the 80s was behind us, and it was all about the future.

"In the 90s, even though Rob left the band after that album, the bands that came through – whether it was Pantera or Megadeth or whoever – probably heard the album and got on board with it, thinking they either had to improve on it or get heavier. So I think it was a very important album in the genre of metal."