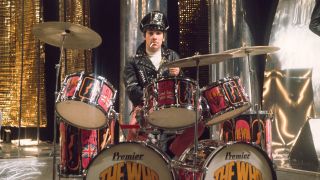 “I loved Keith Moon. He was a good mate of mine. I remember one time, we were both in Melbourne, Australia. Moony called me up and said, ‘Fancy a drink? Come round to my room’. So I came up to his room, knocked on the door. He lets me in, and as I look down on the floor, there’s a row of about ten snare drums. I said to him, ‘What you gonna do with them?’ And he says, ‘I’ll show you…’

“He picked one up and threw it – and it smashed through the fucking window. We were about eleven storeys high. So we both looked out of the window. It landed right in the middle of the high street in Melbourne, and there it was, just bouncing down the middle of the road.

“I’d have given anything not to have joined The Who [in 1978], and for him to still be there. I said to them when I joined, ‘I’m not gonna try and imitate Moony. I can’t do that. I won’t do that. I’ll just play me’. Because you can’t copy Keith Moon. No one could replace him. There are quite a few favourite tracks. I like ’em all…”

“I just love Won’t Get Fooled Again: the sequencer part, the lyrics, everything about it. Moony really captured the moment. As a drummer, I rate him as high as I can possibly rate him – because he was different. He was unique, like nobody else, so he has to get full marks for that.”

“I found Substitute fairly easy. They were all singles, so in those days, they were quite short songs, y’know: My Generation, Can’t Explain, Substitute. It’s about capturing the moment. Funnily enough, I did Substitute when myself, Pete and Roger got together for the first time in years, and we did it at Rock ‘N’ Horsepower. We never rehearsed at all. The three of us walked straight onstage and just played it. Amazing.”

“With The Who, we used to play for three-and-a-half hours, and the only break I got was in Behind Blue Eyes, which was a slow song. It starts out with Daltrey singing and it’s only guitar and vocals, and then halfway through, Moony comes in. So on that one, I sort of came in later – and I took all that time to catch my breath. I looked forward to that one, so I could have a rest. Then you’ve got another hour and a half onstage…!”

“It’s almost like a Bo Diddley beat. I just did it on the hi-hat and the snare. Moony would just stop and start, he’d do anything. He was unique. A lot of drummers [these days], it could be anybody. They’re all the same. They’re playing to click tracks all the time, and that pisses me off. Everyone’s forgotten what feel is all about. Y’know, playing your emotion.”

“I loved playing Pinball Wizard. It was so rewarding to play as a drummer, because you have to get your teeth stuck into it. You had to think and be on the ball. One of the hardest things I ever did was learning The Who’s complete repertoire. It wasn’t easy. Their songs are quite complex. The arrangements are not as easy as you think. They’re all challenging.”

“Just a brilliant song. It makes the hairs on the back of your neck go up. That one wasn’t challenging to play technically, just very exciting. Most people will say to me, ‘What was it like being in those three big bands?’ And I can sum it up by saying, the Small Faces was the most creative, the Faces were just like having a party every day – and The Who was literally pure, unadulterated excitement.”

“I like going back to the beginning, to I Can’t Explain, and those kind of things. You see, on I Can’t Explain, Moony had a hi-hat in those days and a small drumkit. So it’s quite rare to hear him playing straight like that.”

“Being a mod, I always thought My Generation was a fucking great song, an unbelievable song. Once a mod, always a mod, y’know? Moony was all over the place. That bit at the end where he goes crazy on the drums? I know – I’ve done it. There are fills that you have to play because the song dictates it. But I tried to bring my own vibe to it. You can’t replicate anything that Keith Moon did. You can only put a Keith Moon hat on and hope for the best. There was only one drummer for The Who…”

“I like Moony on Sparks as well. I mean, Pete Townshend sums him up really well. Y’know, he’d go in and out of time, all over the place, all through the song, but he’d still come back in time. It was just nuts. I remember the first time we played Sparks, back in 1979. It was in New York, in Madison Square Garden. Townshend said, ‘Right, we’re gonna do one that we haven’t played before, and one we haven’t played with Kenney’. I went, ‘What the fuck?’ And he said, ‘Just follow me’. So that was the first time I ever played Sparks – unrehearsed, in front of fucking 17,000 people. But it was fantastic. Because that was the nearest you got to Moony. Spur of the moment. Just electric.”

“Moony was nuts off the drums and he was nuts on them. But with Baba O’Riley, it was nice to see him play just a little bit more controlled. He had to do it to a click track, that one, because of the sequencer part. I think, to be honest, you wouldn’t have been able to play a drum part like that unless Pete Townshend had come up with that arrangement. Because if you’ve got great arrangements, you can do dynamic stuff on the drums.”

Kenney Jones is behind Rock ‘N’ Horsepower, a charity festival that celebrates music and classic cars in aid of Prostate Cancer UK. For more information on prostate cancer, visit www.prostatecanceruk.org.