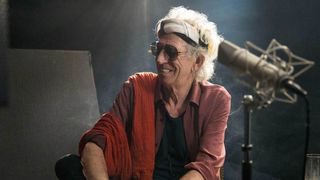 It’s all over now, but what did we learn from having Keith Richards at the controls of BBC4 for three nights? Between classic movies, vintage sitcoms, rare music footage and knockabout cartoons, the Stones legend popped up on screen to occasionally explain his programming choices, and share a few more words of wisdom.

Keith introduced a string of Tex Avery cartoons across the weekend, memories from his boyhood cinema visits. He also doffed a cap to his favourite comedians, Max Miller (“he got banned in loads of places, just like me”), Tony Hancock (“the first comedian who knew how to work on TV, a must-see every week”) and the “errant genius” Spike Milligan (“there’s nothing wrong with being nuts, as long as you don’t kill somebody”).

“You’re on the night shift, forever”

Rock‘n’roll is an after dark profession, Keith explained, over vintage wildlife footage of badgers, foxes and other night-dwellers. “Spending a lot of your life as a nocturnal creature you get a certain affinity for owls and little furry things you can’t quite describe. The fox is a smart guy.”

“Eyeballs will go for anything; they’re the whores of our senses. Ears are a little more discriminating”

Although he admits the Stones made “a few good ones”, Keith claimed not to be a fan of music videos. “You write a song and then some guy comes along with a camera and takes it off in another direction.”

“We’re going through a technological revolution right now, and everybody’s fallen for it like suckers”

No downloads, iPods or Kindles for Keith, preferring the feel of records and books in his hands (“I need to see them, to touch them”). He described smart phones and social media as “second-hand living”, and claimed not to own either a phone or a computer. “I have people that do, but don’t call me; I got no number.”

“You should see the blue pages, baby. The real book ended up on the editing room floor”

Asked about his autobiography, Keith confessed it was difficult process and that several passages had to be cut because he couldn’t prove it, “especially about Scotland Yard.”

“HP Sauce is more addictive than anything I know”

Culinary Keith paid tribute to his favourite foods, confirming that he eats shepherds pie before almost every gig. “You don’t want to eat anything solid. It’s like baby food. Pure fuel.” He also offered a few tips on how best to make one, directing viewers to keefpie.com.

“The Stones sold out before The Who”

Keith dusted off the Rice Crispies TV commercial the band recorded in 1964, while also professing a fondness for the “film noir” of cigarette ads (Strand, Senior Service). “That’s what advertising is all about; to sell you something you don’t really need. Satisfaction is all about that.”

A heartfelt introduction to the 1969 documentary Johnny Cash: The Man And His Music, about a “fellow traveller”. There were also tributes to recently fallen friends Merle Haggard and Prince Buster.

“Horse shit was the essence of growing up”

Prior to showing Julien Temple’s documentary London Babylon, Keith waxed lyrical about the earthy smells he associates with his youth. “I’m pleased I got to see the old London before they put up the Cucumbers – not that I don’t like the Cucumbers”

“The fact that I’m not dead seems to impress people”

A closing thought on his perceived invincibility. “It’s really not that difficult, it depends on your constitution. I come from very good stock. We can take a few knocks and even damage ourselves without any real damage. After apparently being the most likely to die for 50-odd years, you sort of realise that you’re doomed to live, so you better get on with it.”