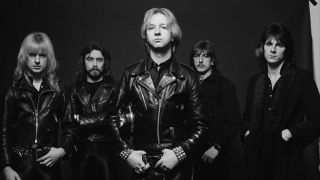 In the spring of 1980, Judas Priest released an album that was to prove so successful within the parameters of its genre that it would almost come to define the term ‘heavy metal’. British Steel, the Birmingham-based group’s sixth studio record, was a masterclass in leather-and-studs bombast.

Almost four decades on, British Steel remains a cherished gem from the golden age of British metal. What separated Judas Priest from the heavy metal crowd was their ability to marry the primal, industrial pounding that had reverberated around their industrial-heartland birthplace to a bloody good chorus.

“Although I say so myself, British Steel is a very, very good album,” says guitarist Glenn Tipton. “We had gone into Tittenhurst Park, the home of Ringo Starr, who had bought it from John Lennon, after a previous attempt at another studio, and with only half of its songs written. Until that point, we’d never worked that way before.

“I’ll always recall that 1980 was a great summer, and being in such an inspirational surrounding definitely rubbed off on us,” he continues. “What came out was a set of very simple yet effective songs that, I’d like to think, helped to shape what else was going on [in heavy rock music] at the time.”

Living After Midnight, the first of the album’s three huge hit singles (the others being Breaking The Law and United), was among the songs conceived so spontaneously at Tittenhurst, the Georgian country house near Ascot.

“One night while we were there, John Lennon was on the TV playing Imagine, and of course it was very weird to be in the actual room where he’d been filmed,” Tipton remembers. “You could almost visualise the white piano in the corner.”

In an equally eerie scenario, singer Rob Halford actually got the inspiration for the lyrics for Living After Midnight as his bandmates kept him awake by blasting out riffs and drum beats in the studio below.

“He came downstairs to complain and said, ‘Hey, guys, come on. It’s gone midnight.’ Which shouldn’t really have bothered such a metal icon as Rob,” Glenn says, laughing at the memory.

“It was 4am and we’d been working all day,” Rob protests. “But when I said what I did, the guys went, ‘That’s a brilliant title. Write it down.”

“That’s how easy it was to conceive a Priest classic,” laughs the band’s former guitarist KK Downing now.

“Rob’s comment proved to be a spark for a very important song for us,” agrees Glenn. “It was one of those lucky spontaneous things that sometimes just happens.”

If the song’s swaggering, chest-beating, nocturnal-themed lyric – ‘I’m getting hotter by the hour/Loaded, loaded’ – seemed to set up Rob as a bit of an all-conquering, love-’em-and-leave-’em sex machine, then the singer has no complaints.

“Yeah,” he smiles, “it made me sound like Clint Eastwood from A Fistful Of Dollars, clutching a condom.”

Living After Midnight begins with a drum intro from the then newly arrived Dave Holland (formerly of Trapeze), and then it goes straight to the chorus.“I really don’t know why it turned

out like that,” Glenn admits. “Sometimes the simplest ideas just work out the best. Maybe that was in the back of our minds.”

“There’s a lot to be said for the very famous phrase that goes: ‘Don’t bore us, get to the chorus,’” says Rob. “In this instance we took it pretty literally.”

Both men agree that the vision of producer Tom Allom, who had been retained after the band’s 1979 live album, Unleashed In The East, was fundamental to the project’s success.

In those pre-sampling days, Tom suggested the band raid the studio’s kitchen to rattle trays of cutlery as an enhancement of the ominous grind of Metal Gods. (He also recorded the sound of smashed milk bottles and a police siren for Priest’s more commercial-sounding Breaking The Law.)

“We used to make our own samples in those days, and Tom had such great ideas. I sometimes think that even we [the band] overlooked his importance,” Glenn offers. “He is such a diplomatic guy, and great at getting guitar and drum sounds. What an underrated producer.”

Like the hilarious video for Breaking The Law, in which Judas Priest robbed a branch of Barclays Bank in London’s Wardour Street, armed with their Flying V guitars, and then made their getaway in an open-topped convertible, the video for Living After Midnight was a suitably ludicrous affair. Directed by Julien Temple and shot at Sheffield City Hall, it boasted Dave Holland playing an invisible drum kit.

“The air guitarists, and everybody piling onto a coach, those were early days of videos,” Glenn says of Priest’s comedic vent. “Although corny, I still think they were great. Heavy metal is all about getting together with your mates, donning the gear, drinking a few beers and watching some great music. And in the morning you go back to work, school, college or whatever. It’s therapeutic – nothing more and nothing less.”

Although Living After Midnight didn’t chart in the US (it reached No.12 in the UK), the immediacy of it opened the door there for Priest. “It was absolutely pivotal in breaking the band in many parts of the world,” Rob agrees.

Judas Priest celebrated the 30th anniversary of British Steel by performing the album in its entirety on a North American tour. In 2011, of course, KK Downing retired from the band, who replaced him with Richie Faulkner. In his autobiography, Heavy Duty: Days And Nights In Judas Priest, KK called Living After Midnight’s parent album British Steel “a record that had almost no faults”, though surprisingly he also admitted, “If I’m being hyper-critical, as fantastic as it sounds, the album still doesn’t quite capture how fantastic those recording sessions were. What’s missing? I have no idea.” KK also revealed that producer Tom had invited the members of Def Leppard to sit in as Priest blasted out their riffs (“they sat quietly and were friendly and respectful”).

In February 2018, Glenn announced that he had been diagnosed with the long-term degenerative disorder Parkinson’s Disease and stepped back from touring, the band appointing Andy Sneap of Sabbat/Hell fame as a temporary stand-in. Andy had helped to produce the band’s latest record, Firepower. Since then, health allowing, Glenn has continued to make appearances with Priest whenever possible and in the summer of 2018 he helped them wrap their spot at the Bloodstock festival as part of a rousing four-song encore that closed with a triumphant Living After Midnight.

Perhaps astonishingly, given the song’s enduring popularity, Judas Priest have on occasion dropped it from their live shows.

“Hand on heart, I still love playing it, though,” Glenn insists. “It was written for that very reason, and as soon as the drum beat kicks in, everybody leaps up out of their seats. It’s just that Priest are in such a lucky position to have a big repertoire of songs that people consider classics. Of course, the harsh reality is that you can’t play them all…”