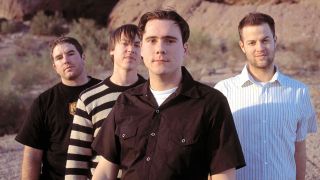 "The Middle is a song that happened in like an hour. It felt like it was just so simple and complete in itself, and it didn’t seem like it needed a whole lot, so it got created really quickly.

"It’s interesting to compare to some of the other songs on Bleed American that were more laboured over. There’s this thing where if something happens and it’s easy then it feels worth less than the thing that you suffered over to create. In the back of my head at least I thought it was the throwaway song of the record. I was like, yeah, it’s cool, but really? You want to put that out as a single? What about this other song that we slaved over?

"It came about when somebody wrote in to our Jimmy Eat World AOL account. We thought we were all being pioneers on Static Prevails because we listed an email address that people could write us at. That was not a thing in ’96. So this person wrote in – I don’t know why they were writing us – but they were just talking about how they felt like they weren’t being accepted by the punk rock kids at their school. She wasn’t punk enough for them. It was really weird, because punk is supposed to be inclusive. It’s supposed to be about not caring. It’s supposed to be the opposite of the behaviour that these people were exhibiting.

"I was just like, you don’t need those people anymore. Why do you care so much about this external validation? It’s a lifelong pursuit.

"I think one of the reasons that The Middle has transcended, and still is a huge song, is that that’s a lifelong quest. Where do you get your sense of self worth? If you’re chasing it with external validation, that’s just an endless cycle of disappointment.

"The success of it was kinda happening in the background. We were just doing what we always did. Playing gigs. With the video, the director, a guy named Paul Fedor, came up with the idea, loosely basing it on that concept of feeling like an outsider. His idea was, okay, so you have that dream where you go to school naked. But what if it was reversed and you were the weird one because you have clothes on?