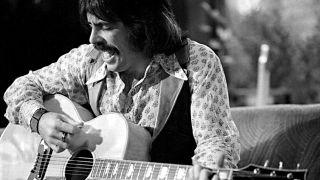 On April 24, 1971, the San Francisco Examiner ran a piece titled “The Hit That Isn’t a Record.” It was about an unsigned local musician named Terry Dolan who was “doing the impossible – having a hit without making a record.” A demo tape Dolan had cut with Rolling Stones’ piano man Nicky Hopkins had found its way into heavy rotation on two FM underground stations, and one of the songs, Inlaws and Outlaws, was lighting up the phones. The article would prove strangely prescient, because after the demo helped land him a deal with Warner Brothers, Dolan made a record that never became a record. At least not until forty-four years later.

Music history is peppered with lost albums, those vinyl equivalents of Atlantis – from The Beach Boys’ Smile to Prince’s Black Album. But what if not only a landmark album went missing in time, but along with it an artist and the potential of an entire career?

“Who knows what would’ve happened with Terry’s career had it come out in 1972?” says Mike Somavilla. “Who knows what his next album for Warner Brothers would’ve sounded like?”

Somavilla, a resident San Francisco music expert and fan, spent twenty-seven years, on and off, considering these questions as he worked to get Dolan’s lost album released. “I made it my life’s ambition,” he says. “A long time ago, Terry gave me a cassette of it, then when I moved out to the Bay Area in 1987, he gave me one of the original test pressings. It was like getting one of the lost pieces of San Francisco’s music scene, the holy grail.”

Born and raised in Connecticut, Terry Dolan picked up a guitar at age 14, soaking up songs by Hank Williams and Leadbelly. Inspired by the burgeoning folk scene of the early ‘60s, he dropped out of college to pursue a career. In 1965, he moved to San Francisco, quickly finding a place strumming in the city’s Haight-Ashbury and North Beach coffee houses. As he sang in Inlaws and Outlaws: “When I came, I came along for the ride / yeah, we were coming into ‘Frisco, I believe so good to be alive…”

In the mid-1960s, San Francisco was briefly nicknamed “Liverpool of the West” because of the burgeoning music scene. KSOL radio disc jockey Sylvester “Sly” Stone was moonlighting as a producer for bands like The Mojo Men and The Beau Brummels. Experimental author Ken Kesey was throwing the first of his infamous “acid tests” at the Fillmore, with psychedelic rock band Jefferson Airplane supplying the fuzzed-out soundtrack. And at the hippie church known as the The Avalon, the first trippy light show projected pulsing liquid blobs across the laid-back country rock epics of the Grateful Dead.

London-born Pete Sears, who’d end being a co-producer on Dolan’s record, and moved to San Francisco in 1968, says, “It felt like a new frontier. The scene was like folk music plugged in. There was a freedom, a character. Being next to the bay, having all these clubs that were open late at night, a community of musicians. It was an anything goes atmosphere, with bands everywhere.”

Dolan sometimes joked that he was “too hard for folk, too soft for hard rock,” but by 1970, he’d found his niche in clubs like Matrix and Keystone Korner, mixing his east coast coffee house ballad sensibility with a more energetic, jam-friendly west coast sound.

Greg Douglass, guitarist for psych-rock band Country Weather, (and later Steve Miller Band) says of Dolan, “He had balls for days, getting up in front of our audience, armed with only his voice, guitar, and a fiery, Irish inner-flame goading him.”

Douglass was a key player in the demo session with Hopkins that led to the record deal with Warners. But he recalls that there were problems right out of the gate. “Things became bogged down due to Nicky’s schedule,” he says. “Everybody wanted his time and talent, and the Rolling Stones were a tad higher on the food chain than Terry. Finally, Terry tearfully appealed to Nicky, and time was scheduled.”

With a band that included John Cipollina, Prairie Prince, Lonnie Turner, and The Pointer Sisters, the first side of Dolan’s album went to tape at Wally Heider’s studio in January 1972. Expectations were high. But the momentum was soon halted, as Hopkins was called away for overdubs on the Stones’ Exile on Main Street, then a US tour. Warner Brothers hedged on the budget to finish. “Terry had lost not only his producer, but also one of the chief bargaining chips that got him his deal in the first place,” says Douglass. “Terry’s album was the first thing Nicky had ever produced, and Terry became a victim of the fact that Mr. Hopkins was now the hottest keyboard player in rock. Terry was beyond distraught. The label was pissed.”

Enter Pete Sears. “There’d been a really long gap,” he says. “It was August when I came in to do side two. The label was running out of money, and there something going on with Warners. I think Terry’s A & R guy had left the label, and the relationship had deteriorated.”

Sears called in favours to get a good deal at Pacific Recorders and recruited guitarists Greg Douglass and Neal Schon, and David Weber on drums. “I played bass, piano and organ,” he says. “It’s hard to remember the details. We did the entire side in three and a half days. It was just another session, in some regards. But it was good fun, and Terry was a great singer.”

With the master tapes, artwork and photos by Herb Greene in hand, Warner Brothers slated the record for February 1973. But two months before, they canceled the release and dropped Dolan from the label.

Sears says, “It’s a very common story in the music business. An artist gets signed, everyone’s excited, then the champion at the label gets fired or leaves, and it’s like turning off a tap.”

Douglass adds, “Without Nicky’s complete participation, Warners deemed the album not commercially viable and decided not to release it. Terry was inconsolable and I didn’t hear from him for a very long time.”

Somavilla says, “He eventually moved on and got over the disappointment, and kept making music.” His band Terry & The Pirates, including Greg Douglass and John Cipollina, were beloved mainstays of the San Francisco scene through the 1980s, releasing several indie albums. By 1989, Somavilla had befriended Dolan and told him he intended to get the rights back to his lost album.

“Terry said, ‘Good luck, have fun,‘” Somavilla says. “When I contacted Warners the first time, they ignored me. As time went by, I couldn’t live with no answer, so I tried again, and was told that the master belonged to them in perpetuity. I still didn’t like that answer. More time went by. Then George Wallace from High Noon Records was out here looking for lost music, and I played him the test pressing. From the first notes, he fell in love. We got a lawyer down in LA. The pieces finally came together, and my dream came true. And Terry’s too.”

Unfortunately, Dolan didn’t live to see the release (he died of heart failure in 2012). But his wife Angie and several of the session musicians have joined Somavilla in celebrating the lost album, which came out in November 2016.

Sears says, “Terry’s record really captures the Marin County scene that was going on in the early 1970s. It was a moment in time. There’s a rawness about it. All this collision of folk and rock and gospel, this interplay between the musicians. We did what we felt like doing. There wasn’t much thought about whether it was commercial, but there are some songs on there that could’ve been radio hits.”

Somavilla says, “I’ve done forty-three record deals for different artists since 1992 and I’m proud of each and every one, but this is the high bar. Terry gave me my start in the business and to bring this out for the public, with it looking so sharp and sounding so good, it’s really gratifying.”

He adds with a laugh, “Now I’m just waiting it for it to go gold.”

The 70s Rock Quiz: how well do you know rock’s golden decade?