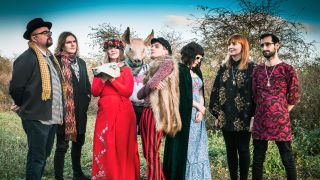 Current release: Every Night Something Happens is out now via Bad Elephant

Glinting in the sunlight of 2019’s dawn, Lost Crowns could be a new national musical treasure waiting to be unearthed. Conjuring images of the headwear of figures such as Richard III whose crown toppled into a bush at the Battle Of Bosworth Field, it’s a very English kind of out-there psychedelic pop, ruled by Plymouth-born but London-based chiselled-cheeked guitarist Richard Larcombe. After 20 years in folk/art rock duo Stars In Battledress with his brother James, Richard’s universe expanded.

“Doing Stars In Battledress for years, I found myself surrounded by outstandingly good musicians,” he says. “I had this vision of elaborate yet psychedelic music that’s difficult to play, although it doesn’t sound like that. It’s like when a hummingbird beats its wings very fast, you know there’s a lot going on but you don’t hear each beat.”

That’s a graceful analogy, and there’s certainly lots going on in Lost Crown’s just-released debut album Every Night Something Happens, brought to life by an A-list of British psych-proggers. Featuring Charlie Cawood and Josh Perl from Knifeworld on bass and keys respectively, Prog columnist Rhodri Marsden also on keys and arrangements, clarinetist Nicola Baigent from North Sea Radio Orchestra and the mysterious drummer ‘Keepsie’, Lost Crowns live up to their ‘funny music supergroup’ title. It’s ‘funny’ as in ‘weird’, although Larcombe feels there are jokes, too. “It’s about the lyrics. You can go as grandiose as you like with the music but there’s an inbuilt pomposity when you’re sitting writing lyrics. I start to feel like a teenager, gazing into the air with a pen in my hand. That’s when I get a bit more self-mocking and sarcastic. I’ll scrub it all out and write something ridiculous instead.”

Keeping it real – and close to Larcombe’s heart – songs such as She Saved Me and Let Loving Her Be Everything are inspired by his wife (“she’s the central thing in my life”), with others by their Boston terriers Dandy and Twinkle (Dandy Doesn’t Know). Then there’s the overarching importance of Syd Barrett. “I learned to play guitar through albums like Piper At The Gates Of Dawn,” Richard says. “One of the things I love is how Syd has these humorous songs but he never sounds like he thinks they’re funny. He had a slightly ‘dead’ way of delivery. I like that quality, where a very wistful, psychedelic lyric comes across with detachment. There’s a real pathos in that.”

The Incredible String Band are also an influence (“I heard them in my teens and thought, ‘Right, a song can be anything.’”), as well as the mighty Cardiacs. “There’s a band of wonderful unpredictability, teeming with details, vying for your attention.

“That’s what I want to do with Lost Crowns,” he explains, “It’s musical cross-hatching, reflecting how complicated and difficult life can be, but is also offering an escape from it.

“I want us, and the listeners, to leave the Earth,” he says. “It’s our tagline, ‘The head will leave the body.” That’s what I say before we go onstage: ‘I don’t mind a few bum notes but the head must leave the body.’” ‘Losing your crown’, indeed.