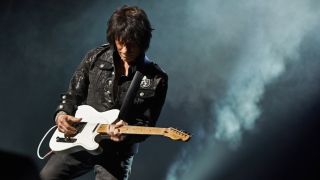 Jeff Beck is one of the last guitar heroes standing. The quixotic axeman has dazzled with his sizzling six-string sonics for almost half a century. From the psych-tinged R&B of The Yardbirds, to the Jeff Beck Group with Ronnie Wood and Rod Stewart, to the radiofriendly jazz/rock instrumental masterpiece Blow By Blow, a Who’s Who of guest appearances (Mick Jagger, Roger Waters, Brian May, Paul Rodgers, Stevie Wonder, Tina Turner) and beyond, Beck is constantly exploring and moving forward.

When I saw Jimi we knew he was going to be trouble. And by ‘we’ I mean me and Eric [Clapton], because Jimmy [Page] wasn’t in the frame at that point. I saw him at one of his earliest performances in Britain, and it was quite devastating. He did all the dirty tricks – setting fire to his guitar, doing swoops up and down his neck, all the great showmanship to put the final nail in our coffin. I had the same temperament as Hendrix in terms of ‘I’ll kill you’, but he did in such a good package with beautiful songs.

Reporters got the number of my flat the day he died. I was suicidal at the time, because my girlfriend had dumped me. And to have to the deal with a call saying “Jimi Hendrix is dead. How do you feel about that?” At first I thought it was a bloody hoax, but as the day wore on I realised it was tragically true.

I don’t want to say that I knew him well, I don’t think anybody did, but there was a period in London when I went to visit him quite few times. He invited me down to Olympic studios and I gave him a bottleneck. That’s what he plays on Axis: Bold As Love. We hooked up in New York and played at Steve Paul’s club The Scene.

Carmine [Appice] knew that I was a big fan of Sly so he arranged the session. We went to San Francisco to do some recording and we were stuck in a hotel for 10 days and never saw him.

Eventually we got into the studio and Sly saw Carmine’s drums and said: “You can take half of that away, we don’t need that.” Then he disappeared into a back room and never came out again. He eventually called me through his microphonic system. I remember sitting in his office cross-legged, with his wife giggling, and we played for about two hours. I’ve got it on tape somewhere.

I was auditioning for drummers and I was late. When I finally arrived there were 15 drum kits set up and one double kit in red glitter. I said to my assistant: “Whose is that flash-bastard kit over there?” And she pointed and said: “He’s the guy you want.” I said: “Let me hear him first and then we’ll go from there.” Cozy and I played for about a minute and you could see all the other drummers packing up their kits. He looked the part as well as being the part. Cozy had the image and he played great.

We struck up a friendship from that time on. His idol was John Bonham, and I guess he was my John Bonham.

I’ve got plenty of stories about Keith. There’s the one about when he wanted to sell me a car. It started off in the gent’s at the Speakeasy – as most of his stories do. He came up to me and said: “I’ve got a roadster I want to sell you.” I said: “I don’t want it.” He said: “Alright, come down the house tomorrow and I’ll give it to you.” So I drove down. Right on time he turned up in this white [Rolls-Royce] Corniche with this beautiful blonde-haired girl and said: “She’s yours. This is my house-warming present for you.”

That night he put me in this room with a jukebox in it and a single mattress on the floor. I went to sleep, and right in the middle of the night Beck’s Bolero [Beck’s first hit single] started up and it played over and over again, it wouldn’t stop. So I unplugged the jukebox. The girl came in and said: “Why did you unplug that? Keith and I were really enjoying it.” Then she said: “By the way, I’m not to go back up to Keith’s, I’ve got to stay with you.” It was a very enjoyable weekend.

I loved his political outbursts. From what I could read between the lines he probably could have made the best American president ever. He was very knowledgeable about world affairs and he had a deep cynical streak.

Me and Ronnie Wood knew no fear when we were together [in the Jeff Beck Group] in ’69. I knew where Frank lived and I drove up to Laurel Canyon in a rented Camarro and did a rubber burnout outside his house. He of course heard it, and came out and said: “You can cut out that shit,” and invited us in. He took a shine to me and Ronnie big-time.

We did a gig in Florida and there was this monsoon-type rain going on; there was a lot of condensation in the air. Ronnie did this fabulous bass solo, I slapped him a high five and 400 volts went across our two hands and blew us both off the stage. We’ve both got small pockmarks on our hands where the sparks hit.

I’d seen quite a lot of him and then, to my amazement, his marriage took a left turn and he’s ensconced in a new relationship, so I haven’t so much of him recently. But he did induct me at the Classic Rock Awards, and that was fun.

My sister knew Jimmy from Epsom Art School. She came to my room one day and said: “There’s a weirdo at school, he’s got a weird guitar like yours,” and then slammed the door.

I ran after her saying: “Where is he?” She said, ‘I’ll take you over there because I’d like to see him play. I don’t believe he can play.” We went over there, he opened the door and we got tea and cake. We visited regularly from then on. His mum had bought him a really good quality tape recorder, so we’d record there. I don’t know where those tapes are now but there’s some rare stuff on them.

When I first heard what he’d done with Led Zeppelin I thought: “That’s a little bit more than inspired by the [Beck’s] Truth album.” When I finally got over that I realised I needed more than I had. I needed a frontman with girly appeal. Plant certainly had that in abundance – the bare chest, golden locks and all that. We [the Jeff Beck Group] had Rod Stewart [laughs].

I know he didn’t like the fact that I took over from him in the Yardbirds and we did great. The general buzz of the band was that they though they were finished when Eric left. At my debut with the Yardbirds at the Marquee I showed them what was what and I got a standing ovation, so that was the end of that.

Two months after that things took off in the States, which pissed Eric off big time. I think he was hankering after going there – like we all were. That was our holy grail, going to America to see the blues players. Within a week we were down in Chicago looking at Howlin’ Wolf. So I think Eric was a bit jealous on that front. But then along came Cream and he blew everybody away.

Nowadays he’s a changed person. He seems a lot more mellow and happier with himself. I think he’s realised that you don’t have to be mean or in anyway guarded, you can offer yourself in so many ways. And he’s given so much pleasure with his playing and deservedly got the accolades.

I met him at a CBS convention in Hawaii in 1981. He was a little worse for wear. He was eating KFC out of a box and then ate the box as well. We went on the road together in ’89. He’d got a beautiful new girlfriend and he was as straight as a die.

We were on the road for about three months. And then the tragic story was when he went in that helicopter he didn’t want to get on it. The people around him talked him into it by saying: “Look Eric [Clapton] has just got on one.” So off he went and never came back.

I think Stevie Ray was the closest thing to Hendrix when it came to playing the blues.

He was the great white hope when he did the solo on [Michael Jackson’s] Beat It. I’d seen him, and I don’t like the speed tapping style very much, but he had it down. I once saw him play a blues solo and it was astonishing, he really can play. But he was on the booze, and objectionable a lot of the time.

I used to get mistaken for him all the time in ’61. I used to have girls screaming at me and I didn’t know what the fuck they were screaming about. I’d pull up along somebody in a car and they’d go: “Mick!” And I’d be thinking: “Who the fuck is this Mick?” Then I realised it was this guy in The Rolling Stones called Mick Jagger.

I was always thinking: “I wonder if I could play in that band?” I seemed to fit the style, loved the blues and all the rest of it. I kept my eye on them. And lo and behold Mick calls me up and wants me to do an album [She’s The Boss]. And that was the first time I met him. I thought Mick was charming. He treated me really well. Loved women, of course.