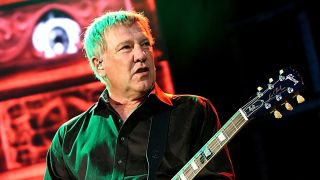 On August 27, 2013 Rush guitarist Alex Lifeson reached a milestone: he turned 60. Born Aleksandar Živojinovi to Serbian parents, Lifeson was raised in Toronto, where he founded Rush in 1968 and where he still lives.

The band have now sold more than 50 million records and were inducted into the Rock And Roll Hall Of Fame by the Foo Fighters – who performed at the ceremony playing Overture from Rush’s 1976 album 2112, and dressed in white satin and wigs. It was the perfect tribute for a man who has never taken himself too seriously.

What can Alex Lifeson do that nobody else can?

Complain about stuff. I can complain like nobody else in the world.

What do you complain about?

Everything! I complain about the coffee not being hot enough, about my weight: “Honey, you’ve shrunk my clothes!”

Isn’t that just your age talking?

Yeah. I just celebrated my 60th birthday. And I complained about that.

Come on, you must have had a party.

I was like, “I don’t want to make a big deal out of it.” So we decided to have a dinner for family and a few friends. We had a chef make a 16-course dinner, a tasting menu, and I pulled a bunch of wines from my cellar. The meal was fabulous and the room was just buzzing. And because it was a Tuesday we got done by midnight.

What was the best thing you ate that night?

There was this grilled octopus that just melted in the mouth. But it’s hard to remember what else we had… the wine flowed. I wasn’t complaining too much that night.

No. When I was younger I did. My mother is not super-religious but she has a belief. My father was the total opposite. He thought religion was a crock. In my early teens I started to question it all. I had friends who were Jesus freaks, others were just very spiritual, and we had these great long discussions about these things. But as I get older it just becomes a less and less sensible thing to think about.

What is the best drug you’ve ever taken?

Cannabis, I think, is the best. But I did take ecstasy and that was fun. That was in the mid-90s. I loved it. So many relationships opened up and became deeper, and they remain so. It’s the one drug where you have those sorts of experiences and they stay with you. I found that after a while that was wearing off. The more you do it, the less it feels like those first times.

When you were on it, did you go around telling everyone how much you loved them?

For sure. And music was just amazing to listen to.

Probably not a lot of people listened to Rush on ecstasy.

Neither did I! It was dance music mostly. I remember doing E one night with my wife, just the two of us. In the living room in our old house we had a huge sound system – 6,000 watts or something. We got dressed up and sat there drinking orange juice and smoking about a thousand cigarettes and we listened to Nine Inch Nails and Tool – all this loud, intense, heavy music. We had such a ball.

What, to you, are the worst songs that Rush ever recorded?

Tai Shan [from 1987’s Hold Your Fire] is one of the worst, easily. And Panacea [part of the epic The Fountain Of Lamneth, from 1975’s Caress Of Steel]. It was an attempt at something that didn’t really work out. It was… innocent.

It might have sounded pretty profound if you were on ecstasy.

Have you had any New Year’s Eves as lively as the one in 2003 when you were arrested and tasered by police?

No. That was a bad experience. What does it feel like to be tasered? It’s a terrible, terrible, terrible feeling. Your body’s shuddering, you’re in extreme pain. And when you’re lying in a pool of your own blood, you’re wondering, “Why are they doing this to me?” And I had it done repeatedly – five times. Is it like a shock from an electric fence? That times a hundred. Your whole body is uncontrollable. It lasts about eight seconds but it feels like a couple of minutes. Hundreds of people have been killed with tasers.

I didn’t learn more languages. I speak Serbian, English and a smattering of French. But at the core I’m a lazy person.

To be a good person, to live your life sharing, being considerate of others, and loving. Passing something forward. It’s less about making money and getting ahead – which is easy to say when you’ve had success.

What will be on your tombstone?