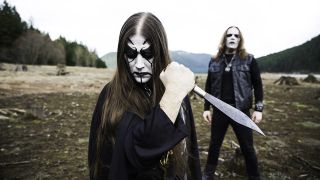 Black metal may not put much store in the rational, but even by the scene’s standards, Inquisition’s rapid rise to the the top tier, after existing as an exotic curio more than two decades, seems to have been via some inter-dimensional wormhole than any explicable path.

Ever since the release of though of 2013’s Obscure Verses For The Multiverse, the Columbian, now Seattle-based duo of Dagon and drummer Incubus have been the source rabid worship, packed gigs and albums flying off shelves like a flurry of demonically possessed ninja stars – and all for a band whose brazenly mystic, off-kilter take on black metal is likely to leave you unable to find you own bathroom.

Praise the swirling, arcanely aligned stars above, because the follow-up to Inquisition’s breakthrough opus is soon upon us. Rather grandly titled Bloodshed Across The Empyrean Altar Beyond The Celestial Zenith, the band’s sixth album will be emerging from the Season Of Mist nebula on August 26, and we have an early stream of the album in its full exhilarating, synapse-rewiring glory.

With luminous riffs whirling on strange axes like drunken galaxies around Dagon’s monotone, tuned-to-a-cosmic-frequency croak, Bloodshed… may still take Immortal-style, frost-corroded guitar tone into reams where the laws of physics no longer apply, but it’s also Inquisition’s most immersive and potent album to date. Sonic crosscurrents are galvanised by compulsive, magnetic grooves, all coalescing into moments of startling beauty and a sense of tantalising vastness whose hallucinatory splendour resonates with the very heart of black metal.

Recalibrate your mental dial, gaze upon the unfathomable dramas unfurling amongst the heavens above and lose yourself in the revelatory wonder that is Bloodshed Across The Empyrean Altar Beyond The Celestial Zenith!

Chuck out your compass and pre-order Bloodshed Across The Empyrean Altar Beyond The Celestial Zenith in its many manifestations here!