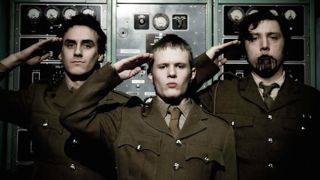 Reuben, somehow, always seemed a band out of time. It was partly their fault – they never played the game. And it was partly the fault of others – they never seemed to get the crack of the whip that contemporaries such as Hell Is For Heroes or even Funeral For A Friend enjoyed. But, as is so often the case, it was also partly pure bad luck.

It shouldn’t have happened to them. A decade on, their debut album Racecar Is Racecar Backwards (which is being reissued by Xtra Mile on its anniversary) still sounds thrilling. It buzzes and judders, explodes and whispers and retains the feeling that it was a very British kind of rock: smart, sensitive and intelligent, but powerful, impassioned and just that little bit different. Amid the trauma and truth of it, there was humour too.

The band was formed by wise-cracking, loudmouth singer/guitarist Jamie Lenman alongside bassist Jon Pearce when the pair were introduced by a Surrey guitar teacher while they were aged 13 in 1998. They played local gigs and shared stages with the likes of Hundred Reasons. They started writing songs together, but in those early days most of their set comprised of Green Day and Nirvana covers. “It was irritating to have to drop them, they were the strongest part of the set,” deadpanned Lenman once, making the sort of humorous comment that helped mark the band out as ‘different’ by a mainstream industry who never got them.

In the early days, drummers came and went while record deals were put on the table then just as quickly whisked away. EPs and singles came out through local labels with the recording paid for by jobs in supermarkets and, in Lenman’s case, the local chip shop. “It was really frustrating,” said Pearce. “We knew we had these great songs but things kept falling through time and time again.”

Around them, their contemporaries were exploding. By 2002, Hundred Reasons had become Britain’s most exciting new band, and in their wake others like Hell Is For Heroes, Funeral For A Friend and – albeit with a very different sound – Lostprophets emerged. But it wouldn’t quite happen for Reuben.

Lenman in person was (and still is) ebullient and outspoken – almost nothing was off limits when he got talking – but his songs were riddled with personal anxiety and quite brutal self-truths. Perhaps it was that honesty that appealed to some but turned others off. But it was that honesty that meant the band would never bend to the industry’s will, never compromise themselves for a record deal.

“Living at your mum’s house and working in a chip shop is rock ‘n’ roll,” he said. “Because it’s real that way, it’s honest and rock ‘n’ roll should be honest above all else. Getting drunk has nothing to do with rock ‘n’ roll – everyone does that whether they’re in a band or not. Honesty is the most important thing to this band, always be what you are.”

The struggle for attention didn’t stop them dreaming though. “I want to be the band that people have on their stereos when they’re a kid, a band like Pearl Jam, Nirvana all those boys,” said Lenman. “I’d love to mean that to somebody and be that big. It’s just a matter of capturing people’s imaginations by being yourself.”

By 2003, though, the label Xtra Mile had fallen in love with them. Never a label to put people’s preconceptions in front of music they loved, they were delighted to be involved with Reuben and put them at the heart of a growing stable that included Frank Turner’s Million Dead. They put Reuben in the studio in Surrey and the result – Racecar Is Racecar Backwards – became the first record ever released on Xtra Mile (Million Dead’s A Song To Ruin preceded it, but was a joint release with Integrity Records). Its catalogue number was XMR001CD; its 10-year anniversary re-issue, which is due out on November 3 has the number XMR100CD. A neat way of coming full circle.

The original was received enthusiastically in 2004, the band tipped as stars for the future. It twisted and turned, exploded and died back down – never doing the obvious but always accessible nonetheless. There was a punk heart to record that touched on grunge as much as it as it had flashes of post-hardcore.

Their gigs were wild, raucous affairs. Lenman was an excellent frontman, drummer Guy Davies was massively underrated and was possessed of exceptional technical ability, while Pearce held everything down calmly with his bass. They could move effortlessly from pindrop quiet to full-on mania, a sense of humour, integrity and emotion running through all that they did. Like all the best bands, they divided opinion sharply. Their fans adored them and their detractors really hated them. Perversely, Lenman believes that their fans may have put more neutral listeners off – and there’s actually some sense to his argument.

Despite all the plaudits, though, Reuben never did have the success some tipped them for. Xtra Mile was an energetic, passionate and highly credible label but, before Frank Turner’s solo success, it did not perhaps possess as much indie clout as it has now. Meanwhile, Racecar Is Racecar Backwards was released two years after Hundred Reasons’ Ideas Above Our Station kick-started the British scene. By 2004 that scene was waning and would soon be overwhelmed by the noise that bands like My Chemical Romance were making across the Atlantic. Reuben were one of the victims.

Even after Racecar… came out, the band could never really afford to permanently give up the day jobs. “Tomorrow night I’m back in the chip shop, that’s how big we are right now,” said Lenman a week or so after their debut was released.

Reuben remain one of the great lost bands of British rock. They were original, inspired and intelligent. But they could also be tricky, hard to get into and, on their next album – Very Fast, Very Dangerous – would often deliberately avoid the obvious in order to make more challenging music. With the benefit of hindsight, Lenman could see why it didn’t happen as it should have for the band.

“I knew why we weren’t getting six page features in magazines, or why we weren’t on covers – we were niche, and I still am,” he said last year when discussing his solo album Muscle Memory. “The music we made and the music I’m still making is challenging, angular music. Plus we looked like three potatoes and there’s not much you can do about that. We weren’t One Direction. By the end of the band, I was fine with that and I still am.”

Following the release of a brilliantly awkward third album, In Nothing We Trust, Reuben split in 2008 – a hiatus, they said at the time, but one which has never ended. It meant they had lasted 10 years since forming and, in that time, they probably played every single fleapit and toilet venue in the land.

“Perhaps in terms of hard work we deserved to be kings of the world,” said Lenman. “Because we put the work in. But I don’t think we deserved to get bigger than we did because we were niche. If we’d have been playing pop songs and had a saleable image, then that would have been fine but, no, who was going to buy stuff like our last record? Because it was a weird record. It was never going to be on Top Of The Pops.”

The end of the band was sad for all involved. “There were a series of crushing disappointments,” said Lenman. “It wasn’t quite a full-on breakdown that I had, but it was a mini-breakdown. I blew a fuse and had a crash of confidence. We had been working too hard for too long and should have maybe had a break. Certainly there were tensions within the band, but there are tensions within any band and good art should cost you something. I thought the pain was worth it, so no regrets. But it did end painfully and I was worn out completely.”

The legacy, though, is a record like Racecar Is Racecar Backwards – an album that, in another life and another time, would have made them stars.

The expanded two CD re-issue of Racecar Is Racecar Backwards will be released via Xtra Mile on November 3.