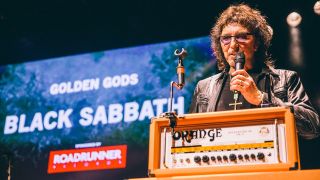 Last night the 15th annual Metal Hammer Golden Gods rolled into the IndigO2 in London to bring the biggest rock and metal party of the year. With Mastodon, Avatar, Clutch and Orange Goblin performing live, we knew it was going to be a special evening, but the number and calibre of artists in attendance and collecting awards just confirmed that heavy metal is the single greatest genre of music on Earth.

And while we’re still trying to crawl through our monumental hangovers and bangovers, let’s relive the incredible night with this gallery of all the action onstage at the Golden Gods. Warning: If you weren’t there, you will be jealous.

The Golden Gods are opened by the mighty Orange Goblin!

In Flames collect the Best Independent Label award on behalf of Nuclear Blast.

Clutch keep the live music going before the second half of the awards show.

Ben Ward and Sandie Soriano win Defender Of The Faith.

Prophets Of Rage win the Spirit Of Hammer award.

Ho99o9 end the night at the official Golden Gods after party.