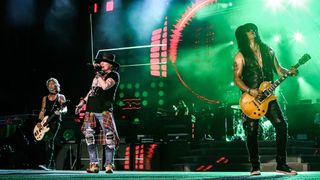 In June 1987 Guns N’ Roses played three shows at London’s infamous Marquee Club on Wardour Street. The band’s first European performances, the shows have passed into legend – like the Sex Pistols at the 100 Club, just round the corner – where the number of people claiming to have attended far exceeds the actual capacity of the venue. It cost just £4 to get in.

I was there for two of those shows. Honest.

I can’t prove I was there, but you can see the top of my head in photos taken one night, a mess of curls down the front, the neck of Slash’s guitar pointing somewhere over my shoulder.

And you can hear me on the recording of Knockin’ On Heaven’s Door, taped at the final show and released as the B-Side on the 12” of Nightrain a couple of years later. That’s me, screaming during the quiet bits. Honest.

They were two of the most exciting shows I’ve ever seen. Appetite hadn’t come out yet, but I’d worn my copy of Live ?!*@ Like a Suicide out, and Geffen had released a double A-Side single a week before the first show. It’s So Easy was good, but Mr Brownstone was extraordinary. It was equal parts sleaze and fury, with a greasy riff that slithered like Aerosmith at their most lascivious and a chorus that hinted at the kind of depraved lifestyle that simply wasn’t an option for a callow arts student from Hounslow. It might have been about the tragic, gnawing spiral of heroin addiction, but it was somehow glamorous and ultimately glorious.

I’ve no idea whether that “most dangerous band in the world” tag was being bandied about in June 1987, but the show really felt like a step into the unknown, as if anything might happen. It felt explosive.

I swore I’d never see the band again. They progressed to bigger, safer venues. They stopped being the band that a few of us were lucky enough to watch and became the band that everyone wanted to see. They went from clubs to halls, from arenas to stadiums, and I didn’t want to tarnish the memory of my shows, or to see them in an environment where their impact might be less visceral.

Look: Our people are dropping like flies. We’re little more than a month into the year and death’s relentless churn shows no sign of waning. Outside, the world is in tatters. Whatever your opinions of Trump or Brexit, it’s clear that we’re more divided than ever before. Confusion reigns. Anger prevails. Spite is a default setting. We just don’t like each other as much as we used to. And it’s miserable.

Guns N’ Roses aren’t going to fix this. They’re not a panacea. That would be ridiculous. But for one night they just might make things feel a little different. Anyone who saw Axl rescue AC/DC last year can vouch for the fact that there’s an unexpected streak of humility running through the man now, and for all the jokes about turning up late and throwing tantrums, the Not In This Lifetime… tour appears to have run like clockwork. The shows have been on time, spectacular, and spectacularly well-received.

Of course they have. Axl’s fit and on form, Slash and Duff are proper dudes – two of the greatest ambassadors for proper rock around today – and the band has an arsenal of songs that reflect their position as one of the greatest hard rock acts this world has ever known.

So I’m going to make my way down to the front when the band play the London Stadium – just seven miles east of that 1987 show – and for a couple of hours I’m going to forget about all the other shit that’s going on. They’ll roll out the classics, from Paradise City to Welcome To The Jungle, from Sweet Child O’ Mine to, yes, Mr Brownstone. They’ll play songs I’ve never seen them perform (and I’ve got a lot of catching up to do), and they might throw in an unexpected cover or two. And as it all climaxes, and as the fireworks skewer the sky and the confetti tumbles and the crowd heads for the gates, I’ll probably wonder where the hell I’ve been all these years. And I’ll wonder if we’ll ever see their like again.

Welcome back. I’ve missed you.