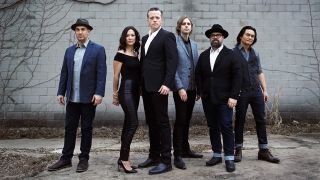 That sounds a little odd coming from a man who has sustained a 16-year career playing rock’n’roll, first as one of three guitarists in Drive‑By Truckers during their most Skynyrd‑esque phase, then as a solo artist, fronting his own band, the 400 Unit. Along the way he’s won Grammy awards, cracked the Top 10 of the US album chart and become one of rock’s most consistently rewarding writers. But what he’s trying to explain is why he rarely gets called a rock’n’roller – last year’s two Grammy awards were for Best Americana Album and Best American Roots Song respectively.

“In America there’s country music and there’s hip-hop,” he says. “That’s all people want to listen to and buy and consume. You have to be one or the other if you want to have a career. I get lumped into the country thing. I feel like I’m a rock’n’roll musician, but because I’m a country person and I have a southern accent, it’s easier to say I make country music. But that don’t sound like country music to me. But Americana’s cool, because Bonnie Raitt’s in there, John Prine and John Hiatt are in there, Lucinda Williams is in there. And all those people seem like rock’n’roll people to me, or at least folk rock, and that’s the type of music that really grabbed me.”

Isbell’s past is like a potted history of southern music. He grew up in Florence, Alabama, just across the Tennessee river from Muscle Shoals, the small town that was the home to both the FAME and Muscle Shoals Sound studios, where so many of the defining records of American music were created; the place whose tiny airport had a sign proudly bearing the words ‘Hit Recording Capital of the World’.

The teenaged Isbell took to hanging around with the Swampers, the session musicians who played with Aretha Franklin, Bob Dylan, the Staples Singers, Paul Simon and so many more and defined the Muscle Shoals sound. He didn’t quite realise the amazing nature of his situation, though.

“It took me a while to reach the epiphany that hanging out with us kids wasn’t in David Hood’s job description,” he notes, mentioning some of those Muscle Shoals musicians. “It wasn’t something that Donnie Fritts needed to do to make his mortgage payments. They did it because they liked us and that’s the kind of people they are. Spooner Oldham had a little house trailer in his yard, and me and my first wife – before we were married – stayed out there, and every time we tried to give him rent: ‘What is this for? Why are you tryin’ to give me money?’”

Being there gave Isbell the sense that a career in music was perfectly achievable – “It was never, for me, a long shot” – and he was focused on songwriting. He’d attended the University of Memphis to study creative writing, figuring it would help him learn how to tell stories in song, then dropped out a few hours short of completing his degree because he couldn’t bear another minute of the human fitness and wellness component (“It was a book course about how many calories were in a cupcake, and that kind of shit”).

And so, in 2001, he joined Drive-By Truckers, and stayed for three albums – Decoration Day, The Dirty South and A Blessing And A Curse – before leaving the band in 2007 and heading off as a solo artist. His life at the time, though, was defined as much by alcohol as by music.

“As soon as the sun went down I started thinking about going out and drinking,” he says. “If I was writing a song, it didn’t matter if I had a verse or a chorus or an entire song, if the sun was going down I was thinking it’s time to go to the bar. After a few years of drinking heavily, I got to where I did things I wouldn’t have otherwise done. I’m sure I wasn’t a delight to be around, especially towards the end.”

Isbell stopped drinking five years ago, and suddenly output that had previously been solid became spectacular. His fourth solo album, 2013’s Southeastern, became a hit, and follow‑up Something More Than Free went to the Top 10 and won him his Grammys. He’s sure there’s a link between giving up the booze and getting up on his career. “I had more hours in the day,” he explains. “Now I’ll sit for maybe eight or ten hours at a time if I need to, until something’s right. And my hearing got better, which made the shows better. Everything changed.”

Now, with his new album The Nashville Sound, his songs – portrayals of American lives on the margins, set to music that is sometimes hard, fiddle-laden country, sometimes tough rock’n’roll clanging with overdriven guitars – find a new relevance and resonance. They’re songs, he says, that might often be about “a certain type of person in America who feels like they’re ignored and they’ve always been ignored. Some of those characters would certainly have voted for Trump,” he says, laughing. “Hell, some of my characters are murderers, so they would clearly have voted for Trump. But yeah, I try to give a voice to the voiceless where possible.”

Now Isbell is focused on getting his songs in front of as many people as possible. He’s found his audience without ever cracking the increasingly gimmick-laden world of country radio, and he believes it’s because good songs can always find listeners. “No offence whatsoever to Dave Van Ronk, but I think there’s a reason there was a Dave Van Ronk and there’s a reason there was a Bob Dylan. If you have something to say that’s legitimate and you say it in a way that translates to other people, and maybe sticks in the mind of other people, I think the audience will find you.

The Nashville Sound is released on June 16 via Southeastern/Thirty Tigers.