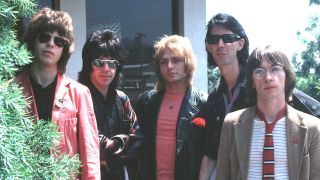 Led by singer/guitarist/songwriter Ric Ocasek, The Cars were the prototypical new wave band. Scoring a string of hit singles during the late 70s/early 80s, selling out arena tours and becoming darlings of MTV, it appeared the band could do no wrong. But by 1988 the once tightly knit group had completely unravelled.

A decade later, Ocasek explained that the situation hadn’t improved: “We don’t keep in contact at all,” he said, “apart from I see Greg quite frequently. But I haven’t seen Elliot in a few years, I haven’t seen Ben in about eight years, and I haven’t seen David in about three years. We don’t talk on the phone. We’re pretty much a dysfunctional family.”

It wasn’t always that way. Ocasek, from Baltimore, and Ben Orr, from Cleveland, got together in the early 70s when they moved to Boston. There they put together a short-lived folk group before returning to their true love, rock’n’roll, and formed Richard And The Rabbits followed by Cap’n Swing.

It was during this time that Ocasek and Orr brought in keyboardist Greg Hawkes, guitarist Elliot Easton and drummer David Robinson (a member of proto-punkers The Modern Lovers).

Easton recounts his first impressions of Ocasek and Orr: “They were playing at a Warner Brothers party for Foghat. I remember being very struck because it was the first local band I’d ever heard in Boston that was doing their own music – really strong. I distinctly remember having the thought, ‘I want to play in this band’.” He didn’t have to wait long.

By 1977 the four-piece had settled on a new name, The Cars. The songs and sound were in place – a blend of what would become known as new wave (Hawkes’s synths, Ocasek’s muted power chords) and arena rock (stadium-ready choruses, Easton’s guitar heroics) – with Ocasek and Orr splitting the lead vocals.

From the off, it was clear that The Cars had one songwriter in the band: Ocasek. “Our band never jammed, I wrote all the songs. I put them down on tape, with the parts on, and people learned the songs,” he explained. “I’ve never done a song by jamming with somebody else. I don’t like the idea of it. I don’t like to write with others. I started The Cars to play music that I wrote, just like I’ve started any band that I’ve ever had. I form bands to play my songs.”

Below, we look back at The Cars' albums, including reunion album Move Like This, released in 2011 without bassist and vocalist Benjamin Orr, who had died of pancreatic cancer a decade earlier.

There are few albums in rock history on which every song is a winner. The Cars is certainly one of them. Almost every track on the record has become a US rock radio standard, and with good reason.

This is Ric Ocasek’s finest batch of songs, and the band sound like a finely tuned new wave machine.

The ‘difficult second album’ – and The Cars avoided it. A continuation of their stellar debut, it’s mostly three-minute, guitar/ synth-driven pop ditties, while the brief Shoo Be Doo served as a preview of the experimental direction the next album would take.

The Cars get artsy here – despite the band members denying that was their intention. No radio-ready tracks that jump at you the way Just What I Needed did, but definitely a bold move for the band at the time.

On the last Cars album produced by Roy Thomas Baker the group return to the radio-friendly new wave style of their first two records. This album’s title track became mandatory listening at every US teen party and dance club of the early 80s.

The Cars team up with producer ‘Mutt’ Lange for the first time, and deliver arguably their strongest album since The Cars. The sonics may be a bit dated (the electro drums, the Def Leppard-esque vocals etc), but Heartbeat City is one of the top mainstream rock albums of the 80s.

The band members were not getting along, and it showed in the grooves of this surprisingly flat record. Proof that the band may have been better off calling it a day after Heartbeat City.View Deal

With Todd Rundgren taking over in place of Ocasek, The New Cars are unveiled with an album that includes mostly live versions of Cars classics. The three new studio tracks hinted that the band might have a promising road ahead.