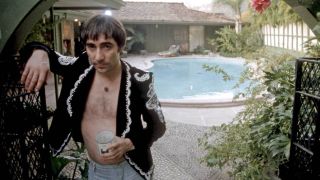 The early signs weren’t good. When MCA released a cover of The Beach Boys’ Don’t Worry Baby in September 1974 as a taster for Keith Moon’s solo album, it was universally panned. Even Moon himself called it “a really shitty record”. Producer Mal Evans was sacked and the whole album re-recorded with studio whizz Skip Taylor at the helm. But no one could save what would be the 70s’ ultimate rock folly. Despite a heap of royal names – including Joe Walsh, Ringo Starr, John Sebastian and Dick Dale – Moon managed to fashion a sow’s ear from a silk purse of musicianly talent.

Two Sides Of The Moon landed in April ’75, by which time MCA executives were reeling from a recording bill of $200,000. “He was living out his fantasies,” recalls Flo & Eddie’s Mark Volman, who sang backing vocals. “The inebriation factor was endorsed by the hot tub, the bedroom with the chains, the S&M suite. But Keith was serious about the project.”

They were uncertain times for Moon. His bandmates in The Who were engaged in their own successful projects. “His alcohol problems were to do with the fact that he felt he couldn’t compete with the others,” says Volman. “But he was doing the best he could do.”

Curiously, Moon drummed on just three of its 10 tracks. “During a break from filming Tommy, he and Oliver Reed had gone to the pub in full costume,” says guitarist Al Staehely, who played on the sessions. “They got some stick from the locals. Keith said that one of them pinned his hand to a table with an ice pick and severed a tendon.”

Listening to Two Sides Of The Moon is a painful experience. No amount of revisionist theory can rescue the doo-wop pastiche of Solid Gold, much less save his cover of The Beatles’ In My Life, which sounds like shit-faced karaoke on a Benidorm package holiday. The only redeeming tracks were Al Staehely’s rocker Crazy Like A Fox — one of only two songs that bear hearing today, the other being countrified toe-twitcher One Night Stand.

“The bad reviews hurt Keith a lot,” says Volman. “It never had a chance, but it was a fun project to make. There’s still a lot of spirit in that record.”