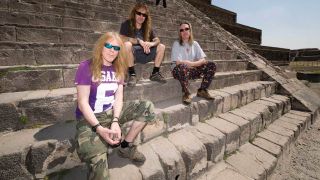 On February 21, 2008, in the Mexican city of Guadalajara on the Somewhere Back In Time Tour, Iron Maiden manager Rod Smallwood wrote in his road diary: “After the show, all the band except Bruce and I would fly on to Mexico City as that way they would get time to go and see the amazing Mayan Pyramids at Teotihuacan.” A couple of days later, Janick and Nicko were filmed larking about at this extraordinary World Heritage Site’s Pyramid Of The Sun, with Nicko haggling for knick-knacks and wondering where Janick could have disappeared to, given Teotihuacan’s lack of Irish pubs. The footage surfaced in the band’s brilliant 2009 tour documentary, Flight 666.

So it’s hard not to see Teotihuacan as the birthplace of The Book Of Souls concept. Thirty miles north-east of Mexico City, the ruins of this 2,000-year old metropolis were once home to an estimated 125,000 people, but by the 8th century it lay in ruins. Not even the Aztecs knew who built it, who lived there or why it fell, although evidence now suggests it was destroyed in a civil uprising after decades of drought and famine. It was the overawed Aztecs who later gave the vast deserted city the name Teotihuacan, meaning ‘The places where gods were created’. The Avenue Of The Dead dominates the landscape, flanked by ceremonial temples and overlooked by the enormous Pyramid Of The Sun, underneath which in 2008 a local guide bestowed an ancient ceremonial blessing upon the band. Nicko offered a prayer of goodwill in return.

Excavations at the Pyramid Of The Moon reveal the more brutal history of Teotihuacan. In 2004, a vault was opened containing 12 bound bodies, 10 of which were decapitated, thrown among the remains of pumas, wolves and eagles. Saburo Sugiyama of Aichi Prefectural University in Japan interpreted this as evidence that “a certain kind of mortuary ritual took place inside the tomb before it was filled in,” adding, “It is most likely that the ceremony created a horrible scene of bloodshed with sacrificed people and animals.” This is the skull-scattered ritual temple territory that Eddie explores in the last level of the Speed Of Light video – objects have been found here that may have been receptacles for sacrificial human hearts, like the one Eddie fills in the last few seconds of the clip – while the stone platforms of Teotihuacan’s step-pyramid construction are visually echoed in The Book Of Souls stage set. Maiden know their shit.